On Monday night, Taylor Swift made a last-minute visit to the set of Jimmy Fallon’s Tonight Show to perform her new ballad “New Year’s Day.” It was an emotional performance, due in large part to Fallon’s grief: his mother, Gloria, passed away unexpectedly last week.

“When we were little, my mom would walk us to this store, me and my sister, and we would hold hands, she would squeeze my hand three times and say, ‘I love you,’ and I would squeeze back, ‘I love you, too,'” Fallon remembered, adding that he had tried to use the same tender way to communicate when she was hospitalized. So imagine the entire studio’s surprise when Swift — whose album Reputation was just released on Friday — echoed that very specific gesture in the lyrics of her own song, which she performed while playing piano.

“Suddenly she sings the line, ‘Squeeze my hand 3 times in the back of the taxi,'” wrote Tonight Show producer Mike DiCenzo in a series of tweets giving the back story on the resonant moment. “I nearly gasped. Tears. I think everyone in the audience started sobbing,” he wrote. “I could see Jimmy silhouetted at his desk dabbing his eyes with a tissue. We all lost it. It was a beautiful coincidence in a beautiful performance. ‘Hold on to your memories, they will hold on to you,’ Taylor sang.”

Swift had been in town over the weekend to perform on Saturday Night Live. She’s headed out west shortly for a string of holiday shows. 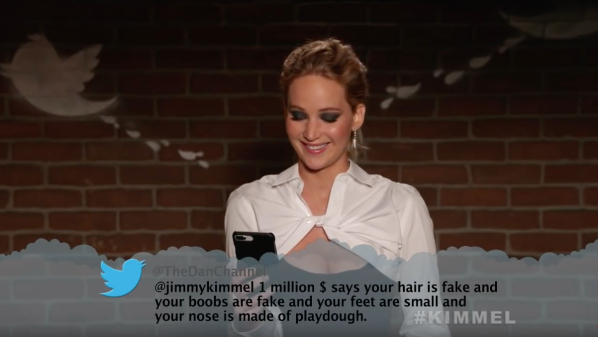 Jennifer Lawrence and Jon Stewart Are Really Great At Reading Mean Tweets About Jimmy Kimmel
Next Up: Editor's Pick