In one of the most memorable scenes in the cult 90s hit Office Space, three workers take a bat to bash their office printer to pieces in a ritual act of rebellion to the tune of the Geto Boys song “Still.”

The Geto Boys rapper Willie D, who co-wrote and raps on the incendiary 1996 track, says the song is about “continuing to unapologetically ride on our enemies with the way we deliver our lyrics.” He thinks the graphic track was the perfect pump up jam for the plight of the white collar workers in the 1999 Mike Judge movie.

“They felt it was an unfair workplace, and it was all about bucking the system, and saying ‘f-ck this,’ we ain’t having it no more and going at it. That was our mentality all along,” he tells TIME.

But when Willie D found out on Monday that a man used the same Geto Boys song in a viral video of himself destroying his Keurig coffee machine amid the company’s decision to pull advertising from Sean Hannity’s show, he said the song couldn’t be more wrong for the video’s message.

“I pulled an “Office Space” with my Keurig… Would be a shame if everyone else joined me in the Keurig Smash Challenge,” Angelo John Gage — a USMC war vet according to his bio — began his video before taking a hammer to his Keurig.

His viral post that included the hashtag “IStandWithHannity” came after Keurig pulled advertising once Sean Hannity sparked controversy for defending Alabama Senate candidate Roy Moore during an interview following a Washington Post report in which multiple women said Moore pursued relationships with them when he was in his 30s and they were teenagers. Hannity said Moore “deserves the presumption of innocence” and “none of us know the truth” about the allegations.

What song should he have played? The hip hop artist had an alternative: “We don’t have the song, but I could write one called ‘Go to Hell.’ It would be a song about his division, his hypocrisy and his double standards.”

Willie D went on to share his thoughts on the allegations facing Moore.

“You want to be a politician? Don’t be a f-cking rapist,” he said. “Those things don’t go together. You don’t want those allegations? Then don’t be violating women.” 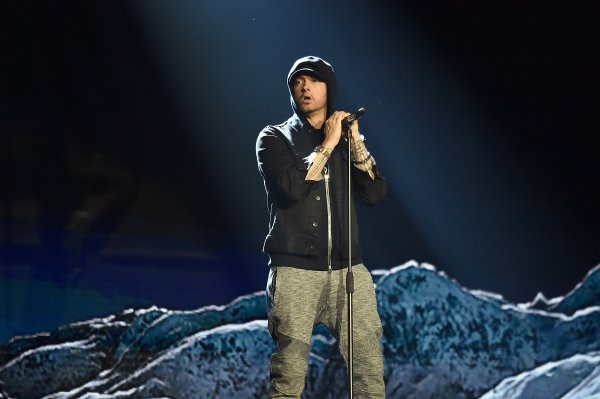 Eminem Performed "Walk on Water" Live for the First Time
Next Up: Editor's Pick