Here's How Many Turkeys Are Killed Each Year For Thanksgiving

Turkey is the centerpiece of most Thanksgiving meals — a time when family, friends and loved ones come together for an expansive and filling meal.

But Thanksgiving marks a far darker time in the short, farm-bred lives of these gobbling poultry. Around 45 million turkeys will be killed this year as a result of high demand for the annual feasts, according to the National Turkey Federation.

That’s more than 18 percent of all the 244.5 million turkeys raised on American farms in 2017, according to statistics from the United States Department of Agriculture (USDA). An estimated 6 billion pounds of turkey meat production is expected for this year — a number that has remained fairly consistent over the last five years, according to the USDA.

The number of turkeys killed each year for Thanksgiving feasts has fluctuated around 45 to 46 million each year, the National Turkey Federation estimates. And so has the number of the millions of turkeys produced in the U.S. in recent years. While the number has fallen from 285.6 million in 1998 to 244.5 million in 2017, it has remained consistently around 240 million for the last decade.

The nap-inducing fowl are typically raised on farms in the U.S. — predominately in Minnesota, North Carolina and Arkansas. The production of these turkeys for consumption was valued at $6.18 billion in 2016, according to the National Agriculture Statistics Service.

“Turkey companies are always striving to keep the turkeys healthy and the farms safe environments,” a spokesperson for the National Turkey Federation said. 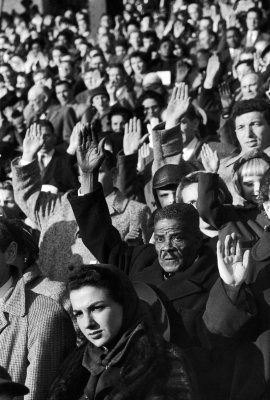 Thousands of People Became American Citizens on the First Official Veterans Day
Next Up: Editor's Pick