'I Believe the Women.' Even More Republicans Want Roy Moore to Step Aside

A growing number of Republican leaders called on Alabama Senate candidate Roy Moore to step aside Monday, with Mitch McConnell telling reporters that he believes the women who accused the former state Supreme Court Justice of pursuing them when they were teens. One of the women says she was 14 when then-32-year-old Moore touched her sexually.

“I believe the women, yes,” Sen. McConnell said when asked about the allegations at a news conference on Monday. “I think he should step aside.”

The embattled judge fired back at the Majority Leader by suggesting he should leave the Senate.

McConnell’s blunt assessment of Moore’s future came after the Senate leader and other Republicans said they thought the candidate should drop out of the race “if the allegations are true.” That qualifier appears to have been dropped on Monday, when more Republican Senators called on the conservative judge to leave the race.

In a tweet, Maine Sen. Susan Collins said after listening to Moore’s radio interview with Sean Hannity and reading his statement, she also thinks he should leave the race. “I did not find his denials to be convincing and believe that he should withdraw from the Senate race in Alabama,” she said.

Sen. Orrin Hatch of Utah also tweeted that he agrees with McConnell in calling on Moore to withdraw. “These are serious and disturbing accusations,” he said. Hatch went on to pitch current Alabama Sen. Luther Strange, who was appointed to fill Attorney General Jeff Sessions’ Senate seat but lost in the primary to Moore, as an “excellent alternative” to the candidate.

Later Monday afternoon, after a press conference in which a woman came forward to accuse Moore of sexually assaulting her when she was 16, several more Republican Senators called for Moore to drop out. “If he continues this will not end well for Mr. Moore,” said South Carolina Sen. Lindsey Graham.

“The appearance of grossly reprehensible behavior disqualifies him from service in the United States Senate,” said Indiana Sen. Todd Young.

At his press conference earlier on Monday, McConnell was also asked if Strange would enter the contest as a write-in candidate. “That’s an option we’re looking at,” he said.

Colorado Sen. Cory Gardner, who serves as the chair of the National Republican Senatorial Committee, released a statement on Monday afternoon calling Moore “unfit to serve in the United States Senate.” Gardner said that if Moore refuses to withdraw from the race and wins, “the Senate should vote to expel him.”

“I believe the individuals speaking out against Roy Moore spoke with courage and truth, proving he is unfit to serve in the United States Senate and he should not run for office,” the statement reads. ‘If he refuses to withdraw and wins, the Senate should vote to expel him, because he does not meet the ethical and moral requirements of the United States Senate.” 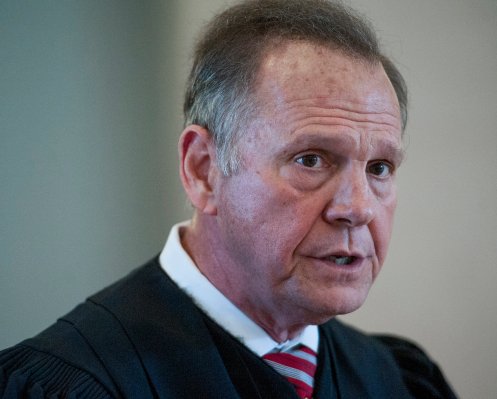 'Disturbing and Disqualifying.' Senate Republicans Call on Roy Moore to Step Aside Amid Allegations
Next Up: Editor's Pick