After surprise-releasing a new song on Friday, “Walk on Water” featuring Beyoncé, Eminem took his rapping talents to London on Sunday for the annual MTV European Music Awards show. There, he performed the song for the first time live, accompanied by co-songwriter Skylar Grey on piano and vocals, who filled in for Queen Bey.

As predicted, fans went wild for Eminem’s return to the spotlight — and the stage. “Walk on Water” is more a rap ballad than a banger, a self-reflective and melancholy track about the perils of fame and fan expectations. But it looks like Eminem is finding his way back into his supporters’ good graces just fine, if this introductory showing is anything to go by.

He even took home an award for the evening, for Best Hip-Hop. “I’m not really sure how I got this, because I haven’t had an album out in a few years,” he said wryly in his acceptance speech; The Marshall Mathers LP2 came out back in 2013. “I got one coming, though,” he added. While he hasn’t announced a release date, his forthcoming album reportedly titled Revival is expected to come before the end of the year. This kicks off a potentially busy run for Eminem, as he’s slated to be the musical guest on Nov. 18’s Saturday Night Live, too. 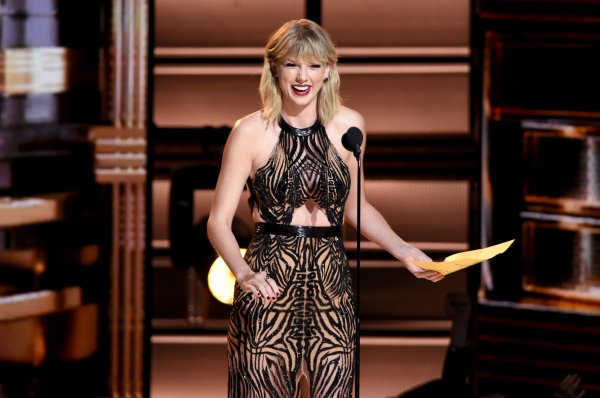 The Internet Is Losing It Because Taylor Swift Just Announced These Reputation Tour Dates
Next Up: Editor's Pick