During the opening of Last Week Tonight, Oliver ran through the past week of news, calling out the New York Times exposé on Louis C.K.’s sexual misconduct, which included stories from five women who alleged the Louie creator masturbated in front of them (either in person or on the phone). Louis C.K. later confirmed the “stories are true” in a statement.

Said Oliver on Sunday, “The New York Times reporting Louis C.K.’s gross sexual misconduct, which is completely indefensible, and which inevitably resulted in the cancellation of his new film, Exhibit A if This Ever Goes to Trial.”

Following the New York Times report, FX dumped Louis C.K. from all its shows, Netflix canceled an upcoming stand-up special featuring the comic, and HBO yanked all of Louis C.K.’s specials from its library. Louis C.K. was also fired as a voice actor on The Secret Life of Pets 2.

“These stories are true. At the time, I said to myself that what I did was okay because I never showed a woman my dick without asking first, which is also true. But what I learned later in life, too late, is that when you have power over another person, asking them to look at your dick isn’t a question. It’s a predicament for them,” Louis C.K. said in a statement last week after the Times story broke. “The power I had over these women is that they admired me. And I wielded that power irresponsibly. I have been remorseful of my actions. And I’ve tried to learn from them. And run from them. Now I’m aware of the extent of the impact of my actions. I learned yesterday the extent to which I left these women who admired me feeling badly about themselves and cautious around other men who would never have put them in that position.”

In addition to Oliver, other late-night hosts and shows have taken on the Louis C.K. story — including Saturday Night Live, Stephen Colbert, and Trevor Noah. 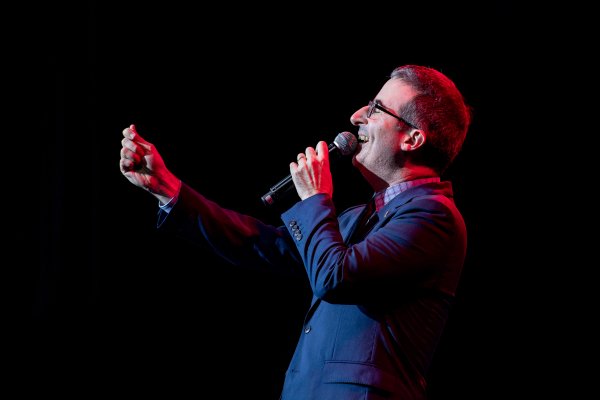 Allow John Oliver to Explain How the Trump Presidency Is Like Being Murdered by a Sloth
Next Up: Editor's Pick