Today is T-Day. That’s Taylor Swift album release day, for anyone not following the hype around the star’s new album Reputation. And — given the obsession with all things Swift — the savvy singer wants to pre-empt all of the hot takes and endless scrutiny that will inevitably go into every lyric on her 15-track album.

To go along with the album release — which currently is only available to listen to as a physical purchase, digital download or interspersed on an iHeartRadio stream — Swift also is selling two magazines she compiled, featuring some of her own poetry, watercolor paintings and lots of behind-the-scenes photographs of the singer filming the music videos, hanging out at home with her cats and posing for fashion photo shoots.

But in the introductory letter in the ‘zine, Swift also makes it a point to address controversy before it begins.

“When this album comes out, gossip blogs will scour the lyrics for the men they can attribute to each song, as if the inspiration for music is as simple and basic as a paternity test,” she writes. “There will be slideshows of photos backing up each incorrect theory, because it’s 2017 and if you didn’t see a picture of it, it couldn’t have happened right?”

In other words, although the internet might be busy applying detective skills and taking a microscope to the stories and references in her songs, she wants us to take those lyrics with a grain of salt. That’s fair; songwriters — any artist, really — should have the liberty to create whatever kind of story they want. Although we may want to assign a specific name as the subject of each of her songs, she seems to be suggesting she’s taken creative liberties to change up some stories. And, of course, a few lyrics could never tell the whole story anyway; there’s only so much that can be drawn from a single oblique reference.

Then again, Swift does have a confirmed history of mining her own experiences for subject matter. She tends to play the smart game with a wink. Even a confessional letter is, in its own way, a piece of the narrative she masterminds. 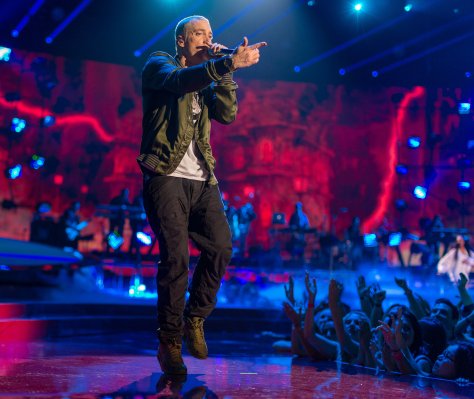 Eminem & Beyoncé Get Reflective on New Song "Walk on Water"
Next Up: Editor's Pick