While some Republicans at the national level spoke out against Alabama Senate candidate Roy Moore on Thursday in the wake of allegations that he initiated sexual contact with a 14-year-old when he was in his 30s, Republicans from his own state seemed to have a different view — with one citing Jesus’ parents to defend Moore’s alleged behavior.

“Take Joseph and Mary. Mary was a teenager and Joseph was an adult carpenter. They became parents of Jesus,” Alabama state auditor Jim Ziegler told the Washington Examiner on Thursday.

Four women have told the Washington Post that Moore pursued relationships with them when they were teenagers and he was an adult. The women were between the ages of 14 and 18, while Moore was in his 30s at the time, according to the Post.

Leigh Corfman, the woman who was 14 when she says Moore approached her, told the Post that Moore touched her over her bra and underwear and guided her hand to his underwear. The other three women did not have sexual contact that went beyond kissing.

Moore denied the allegations on Thursday, saying they are “completely false” and a “desperate political attack.” Senate Majority Leader Mitch McConnell said that Moore must step aside if the allegations are true, and Sen. John McCain went further, calling on Moore to “immediately step aside.”

Ziegler, on the other hand, said the allegations were “much ado about nothing.”

“There is nothing to see here,” the Alabama official told the Examiner. “The allegations are that a man in his early 30s dated teenage girls. Even the Washington Post report says that he never had sexual intercourse with any of the girls and never attempted sexual intercourse.”

In his comments on the incident, Ziegler focused on the fact that the report said Moore had not had sex with the girl and that the relationship happened decades ago. He also pointed to the fact that Moore’s wife is younger than him and the pair began dating shortly after the incidents detailed in the Post report.

“There’s just nothing immoral or illegal here,” Ziegler added, according to the Examiner. “Maybe just a little bit unusual.”

Another home state Republican, Alabama’s Secretary of State John Merrill, also downplayed the allegations against Moore. He told ThinkProgress on Thursday that Moore’s name would still be on the ballot for Alabama’s special election Dec. 12 and questioned whether the allegations were true at all.

“People make things up all the time,” Merrill told the website. “Do I think it’s possible they made this up? I do.” 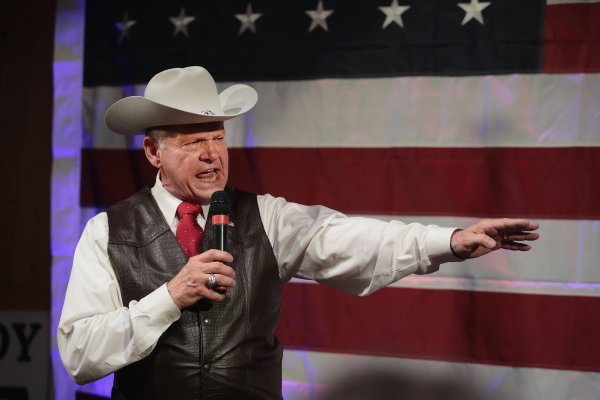 GOP Turns on Roy Moore After Allegations
Next Up: Editor's Pick