Hillary Clinton marked the 1-year anniversary of losing to President Donald Trump in the 2016 election with some jokes at her own expense.

During a Wednesday appearance on Late Night, Clinton joined host Seth Meyers as well as writers Amber Ruffin and Jenny Hagel for a segment called “Jokes Seth Can’t Tell” in which Meyers set his three female counterparts up to deliver some politically incorrect punchlines.

“Every night I deliver a monologue comprised of jokes written by a diverse team of writers,” he explained. “As a result, a lot of jokes come across my desk that due to my being a straight, white male would be difficult for me to deliver. But we don’t think that should stop you from enjoying them.”

Clinton came in near the end of the bit to get in on the roast, cracking hilarious self-jabs such as, “According to a recent report, koalas may be extinct by the year 2040. And according to Fox News, that’s my fault.” 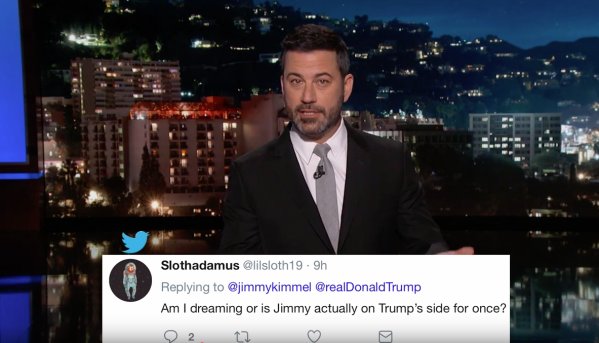 Watch Jimmy Kimmel Read Thank You Tweets for Throwing His Support Behind 'Trumpcare'
Next Up: Editor's Pick