Jon Stewart and Stephen Colbert have long been a top-notch comedy duo, ever since the two appeared in adjacent time slots on Comedy Central back in the heyday of Stewart’s Daily Show and Colbert’s Report. And while both have moved on — Colbert to his Late Show and Stewart to a well-earned retirement of sorts — they haven’t quite finished making cameos in each other’s TV gigs.

That was the case Wednesday night, when a very casual Stewart literally popped up from under Colbert’s desk during his show, eating a pudding. (Why not?) Stewart is doing the rounds to promote the upcoming Night of Too Many Stars, a charity TV event on HBO co-hosted by everyone from Chris Rock to John Oliver, Ellie Kemper and, yes, Colbert as well. They’re raising money for an autism fund through Omaze — and offering intriguing prizes.

“One lucky winner is going to spend an entire episode of the Late Show under your desk,” Stewart explained to Colbert of what to expect. (The winner also will be joined under the desk by Jon Stewart for a “whole segment,” and get to deliver one of Colbert’s punchlines during the taping.)

“I’ve got the hottest ankles in late night,” Colbert quipped back.

The two then participated in an epic spit take battle. Turns out both of them have impressive spitting capabilities. For the full visual, watch the segment above. 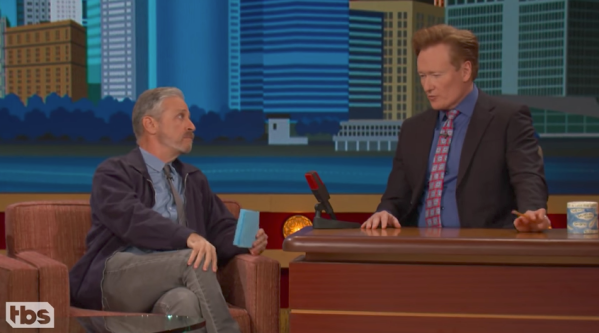