The Troubling Link Between Domestic Violence and Mass Shooters

The First Baptist Church in Sutherland Springs is illuminated by raised lamps as investigators work, hours after the shooting on Nov. 5
Larry W. Smith—EPA-EFE/REX/Shutterstock
By Charlotte Alter

There is no explanation for a slaughter in a church. A shooter’s mind is an unsolvable riddle: nobody can predict which odd loner will turn out to be a sociopath, or which angry outburst presages a massacre. But in hindsight, there are often red flags, and Devin Patrick Kelley displayed plenty of them. He had mental-health problems, a history of animal cruelty and a domestic-violence conviction that should have prevented him from getting a gun. But he got one anyway. Actually, he got four.

On Nov. 5, Kelley, 26, drove to First Baptist Church in tiny Sutherland Springs, Texas, where his wife’s family worshipped. He fired an assault-style rifle into a congregation full of children and grandparents, killing 26 people and injuring 20 more. Survivors said he prowled the aisle looking to shoot crying babies as their mothers huddled under the pews. Among the dead: a toddler, a pastor’s daughter, two first-time attendees and an unborn child. It was a massacre that could never have been predicted. But perhaps it could have been prevented.

Like most convicted domestic abusers, Kelley was not supposed to have access to firearms. But the Air Force acknowledged in the wake of the shooting that it appeared that Kelley’s domestic-violence conviction wasn’t entered into the National Crime Information Center (NCIC) database, which is likely why he was able to pass a background check.

This was hardly an isolated error. According to a Florida International University report obtained by TIME, the military mishandled roughly 1,300 domestic-violence cases between 2004 and 2012, including misclassifications that allowed abusers to go unreported in the NCIC. “There are thousands of cases that have been misclassified,” says Eric Carpenter, an associate professor at FIU and a former Army lawyer who spent years sifting through military court-martial data. “We just know about this one because [Kelley] decided to shoot up a church.”

The problem runs deeper than poor record-keeping. Federal law prohibits anyone convicted of domestic violence or subject to a domestic-violence restraining order from owning a gun. But spotty enforcement can allow abusers to fall through the cracks. While 28 states and Washington, D.C., have laws prohibiting convicted domestic batterers from buying or possessing firearms, only 14 require them to give up the guns they already own. Some laws say domestic-violence restrictions apply only to a spouse, cohabitating partner or co-parent, creating a so-called boyfriend loophole that excludes casual partners. There are three main background-check databases for reporting crimes, but states differ in how they report cases. Some states, like New York, New Mexico and Louisiana, had reported thousands of domestic-violence restraining orders to the National Instant Criminal Background Check System Indices (NICS Indices) as of December 2016, while 33 states reported none at all.

Mourners gathered on Nov. 6 at a prayer service for the 26 victims in Sutherland Springs
Scott Olson—Getty Images

Kelley was the kind of guy who never should have passed a background check. In 2012, his then wife Tessa Kelley accused him of beating her, choking her, threatening her with a gun and hitting her infant son hard enough to break his skull. Kelley was charged with domestic violence in a military court and sent to a mental hospital in New Mexico, and then briefly escaped the facility. Former hospital staffers say he had hoarded firearms and made death threats against his military superiors, and suffered from an unspecified mental disorder. Later that year, he pleaded guilty to domestic-violence charges and spent a year in the brig before receiving a “bad conduct” discharge from the Air Force.

Once out, Kelley didn’t clean up his act. In 2013, the Comal County sheriff’s office investigated him after a complaint of rape and sexual assault in New Braunfels, Texas, but Kelley was never charged. When he lived in Colorado in 2014, neighbors called the police after they witnessed him beating his dog; he was cited for animal cruelty. That year, sheriffs responded to a domestic-violence call at Kelley’s home and checked on his then girlfriend, but left without filing charges. That girlfriend, Danielle Shields, became his wife soon afterward.

In recent months, Kelley’s social-media accounts had grown darker. He lost his job as a security guard in July. It seemed like he was going through a romantic breakup. He posted pictures of his guns online. He sent threatening texts to his mother-in-law. It was her church in Sutherland Springs that he targeted for the massacre, in what Texas officials called a “domestic situation.”

Which isn’t surprising either. A majority of mass shootings between 2009 and 2016 involved domestic or family violence, according to an analysis by the gun-violence prevention group Everytown for Gun Safety. The group found that in 54% of incidents in which four or more people (not including the shooter) were killed with a firearm, an intimate partner or family member was among the victims. Most of those mass shootings happened in the home. But a TIME analysis of Everytown’s data found that of the 46 mass shootings that took place entirely in public since 2009, 33% of the shooters had a reported history of violence against women.

James Hodgkinson, who injured Republican Representative Steve Scalise of Louisiana and several others when he opened fire on a congressional baseball practice in June, had been arrested in 2006 after hitting and choking his foster daughter. Omar Mateen, who killed 49 people in the Pulse nightclub massacre in Orlando in 2016, had abused his ex-wife. Robert Dear, who killed three people and wounded nine others when he opened fire on a Planned Parenthood clinic in Colorado in 2015, had been accused of domestic violence by two of his ex-wives.

But in scientific terms, the link remains anecdotal. Just because mass shooters are often abusers doesn’t mean abusers are more likely to be mass shooters. That’s why the red flags appear only in hindsight: researchers lack sufficient evidence to prove the connection ahead of time. “Right now we don’t have enough data to have a pattern,” says Susan B. Sorenson, a professor at the University of Pennsylvania and director of the Ortner Center on Family Violence. Gun-rights advocates use that uncertainty to argue that tougher restrictions on gun access for domestic abusers are unnecessary. But that logic doesn’t hold up either. “The one thing that we know that [mass shooters] all have in common is that they have access to massive firepower,” says Sorensen. “That’s the single unifying force.”

Keeping guns from domestic abusers is a rare subject on which Republicans and Democrats mostly agree. “There are enormous problems with the background-check system,” says Senator John Cornyn of Texas. Republican Senator Jeff Flake is teaming up with Democratic Senator Martin Heinrich to introduce a bill that would require the military to accurately record and report domestic-violence convictions. And Republican governors in Utah, North Dakota, Wisconsin and Michigan have taken steps to limit gun rights for domestic batterers. Experts say laws that require abusers to surrender their guns are particularly effective. States that have implemented relinquishment laws saw a 14% decline in intimate-partner gun homicides, according to researchers at Boston University and Duke University.

Nobody could have predicted the latest massacre. But there are laws to prevent people like Kelley from getting a gun. If only we would enforce them.

–With reporting by W.J. HENNIGAN and NASH JENKINS/WASHINGTON and ABIGAIL ABRAMS/NEW YORK 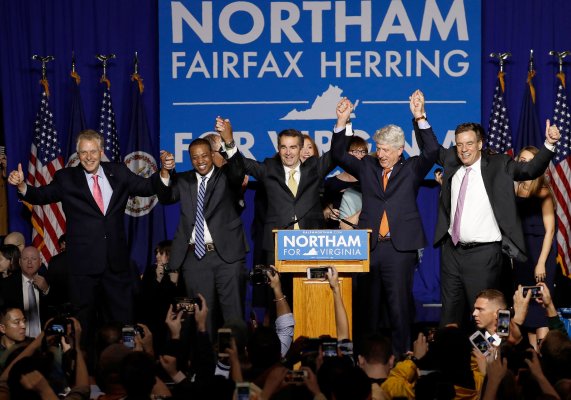 Voters Deliver a Big Win for Democrats, and a Blow to Trump
Next Up: Editor's Pick