Macron, at right, meets with TIME’s Felsenthal and Walt in Paris on Nov. 7
Jonathan Woods for TIME
By Edward Felsenthal

Fifty-four years ago, TIME’s cover featured a President of France who had a vision for a French-led world order, a tendency to speak bluntly and a penchant for pomp. The story, which ran with the cover line “The Perils of Grandeur,” chronicled Charles de Gaulle’s determination to “give Europe a new voice, direction, and self-assurance.”

Today the cause of a common Europe faces another identity crisis–and, in France’s 39-year-old President Emmanuel Macron, it has a new champion. Hosting Vladimir Putin at Versailles and parading the Champs-Élysées in an open-topped military vehicle, Macron is determined to remind the world what French international leadership looks like. And as the U.S. and Germany increasingly focus inward, he has become the West’s most vocal proponent of globalism–in six months on the job.

Paris-based correspondent Vivienne Walt and I sat down with Macron in his office at the Élysée Palace. In a wide-ranging interview, we discussed Donald Trump (Twitter is “not compatible with the kind of distance you need to govern,” he said); his much-talked-about marriage (“current convention was not consistent with my choice”); and European leadership (“Our generation will not have the luxury just to manage Europe. We will have to refound it”). Above all, what came through was his optimism about a new generation of leaders who can rise above the nationalism of the moment and the failures of “tired and cynical people.”

The peril, of which Macron is well aware, is that his global ambitions will fail without an economic overhaul in his own country, where he has been criticized for unwinding cherished labor protections. “Your voice is not even listened to if you don’t perform at home,” he says.

You can watch the interview and read Viv’s story at time.com/emmanuel-macron. 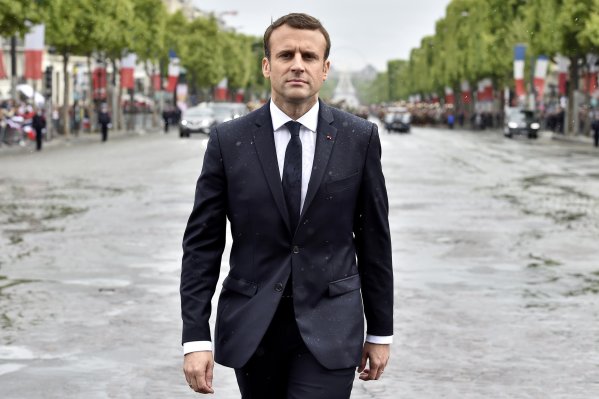 The President of France Is at Home in the World
Next Up: Editor's Pick