'Nothing Is Sacred.' Religious Leaders Take Action on Attacks in Houses of Worship

Twenty-six crosses, one for each of the dead, stand in a field on the edge of town on Nov. 6
Scott Olson—Getty Images
By Elizabeth Dias

The word came in the middle of Sunday-morning worship at River Oaks Church in Sutherland Springs, Texas. A gunman had stormed First Baptist Church two miles down the road. First responders raced from their pews to help their neighbors. Everyone else prayed.

But it was too late. For a congregation whose Sunday attendance averaged 50, the losses were catastrophic. “Most of our church family is gone,” said the pastor’s wife, Sherri Pomeroy, whose teenage daughter was among the dead.

The violence was all the more horrible because it felt so normal. Each new attack repeats the same sick liturgy. As mass shootings continue to touch every corner of public life in America, institutions including schools, malls and movie theaters are developing protocols to defend themselves.

That includes houses of worship. We grieve when a predator targets people in prayer, but it happens painfully often. In 2015, a white supremacist killed nine people at Charleston’s Emanuel African Methodist Episcopal Church–a massacre that allegedly inspired a Sudanese immigrant to open fire at a Tennessee church in September 2017. This year, more than 100 Jewish community centers have faced bomb threats, and dozens of mosques have been targeted with violent threats or vandalism.

Even before the Nov. 5 shooting in Sutherland Springs, the Trump Administration was moving ahead with Obama-era efforts to train houses of worship on emergency security procedures. In 2013, in the wake of the Sandy Hook elementary school shooting in Newtown, Conn., the Obama White House directed federal agencies to develop active-shooter trainings. David Myers, director for the Department of Homeland Security’s Office of Faith-Based and Neighborhood Partnerships at the time, worked to tailor them for religious communities. His team visited half a dozen cities for on-site trainings and held webinar sessions for hundreds of leaders of various faith communities. “It also served the purpose of creating relationships between faith leaders and first responders,” Myers says.

The Trump Administration is ramping up those efforts. Hours after the shooting in Sutherland Springs, Trump’s new director for the same center, Jamie Johnson, told TIME that training religious leaders on security is one of his three top priorities. “We are going to be a whole lot busier in the months and years to come when it comes to safety and security for houses of worship,” Johnson says. “This issue will now come to the forefront of the religious conversation in America.”

So far this year, Johnson’s office has hosted more than 15 in-person and virtual presentations on emergency operations plans for more than 1,500 faith and government leaders. Many of the recent programs have focused on large Christian networks, though there have been trainings for other religious groups as well. Johnson has spoken at the National Association of Church Facilities Managers conference in Nashville, the National Church Safety and Security Conference in San Diego and the Trinity Security Allies’ inaugural Church Safety Conference in Florida. “We teach pastors and church executives to teach their members to be aware,” he told TIME in August, “that not everyone who steps onto a church property has worship on their mind.”

Robert Jeffress, the pastor of First Baptist Dallas and an outspoken Trump supporter, says his staff worked with DHS to complete a safety assessment several months ago. “Large churches like mine have done this, but smaller churches are less likely to do this under the mistaken assumption that they are not as big of a target as we are,” says Jeffress. To protect his 13,000-person congregation, Jeffress has paid security officers at every service, both uniformed and plainclothes, as well as a volunteer security team. The church no longer allows worshippers to carry backpacks of any kind. But it does still permit them to carry arms. “It would be unthinkable in a state like Texas not to allow it,” Jeffress says. “We think that is safer.”

Other pastors are taking their own steps. Three days after the shooting, Samuel Rodriguez Jr., president of the National Hispanic Christian Leadership Conference, held a conference call for the thousands of Hispanic pastors in his network to develop security protocols. Now, he says, it is time for leaders to budget not just for children’s or music programs but for security. “These churches have to pivot,” Rodriguez says. “Nothing is sacred.” 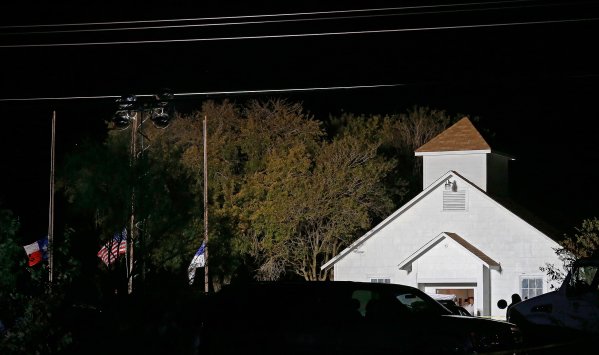 The Troubling Link Between Domestic Violence and Mass Shooters
Next Up: Editor's Pick