Asian heads of state can’t seem to stop rolling out the red carpet for President Donald Trump on his first official visit to the region.

From golf and hamburgers to sampling soy sauce older than the United States and an exclusive dinner in the Forbidden City, Donald and Melania Trump have gotten the royal treatment as they power through Asia – even as Trump’s domestic approval ratings remain mired in historic lows.

In lieu of setting major policy goals, the leaders of Japan, South Korea and China have opted to cement their personal ties with the impetuous U.S. president. Their hospitality one-upmanship has featured as much pomp and circumstance as possible for visits that have lasted no longer than 72 hours.

Here’s a look at how the first couple are being wooed on their “Indo-Pacific” trip:

Trump arrived channeling Top Gun. He wore a flight jacket and greeted American servicemembers at the hangar on the Yokota Air Base.

Prime Minister Shinzo Abe welcomed him to the Kasumigaseki Country Club, where they joined professional golfer Hideki Matsuyama for a round on the green and pounded fist-bumps.

Abe reportedly took a no-holds-barred approach to flattery on the course. “When you play golf with someone not just once, but for two times, the person must be your favorite guy,” Abe told reporters.

Trump famously proclaimed during his 1990 trip that he did not want “f—ing raw fish.” So Abe, the ever gracious host, made sure to appease his guest’s palette — serving hamburgers before the leaders signed hats emblazoned in gold ink. They read, “Donald & Shinzo: Make Alliance Even Greater.”

On the second day of his two-day visit, Trump began by settling an old score. In 1990, he had tried to meet with Japanese Emperor Akihito but found his request rebuffed by a long wait list, according to the book Lost Tycoon: The Many Lives of Donald J. Trump. This time, the emperor not only met the Trumps, but personally escorted them around the Imperial Palace.

Trump then joined Abe for an ostentatious honor guard show before a working lunch that culminated in the now-viral koi feeding party.

Closing out the trip was a state dinner attended by Internet sensation Pikotaro, of “Pen-Apple-Pineapple-Pen” fame.

The one-on-one attention Abe showered on Trump was notable even by the standards of presidential visits. The leaders shared four meals over two days, compared to Obama’s two dinners in 2014 during a diplomatic trip that was designated as a higher-level state affair, Nikkei Asia Review observes.

“I don’t think we’ve ever been closer to Japan than we are right now,” Trump later told reporters.

The world watched with bated breath and fears of an impulsive tweet as Trump touched down in South Korea, the frontline of the nuclear standoff with Pyongyang.

Trump is the first president to make a high-level “state visit” to South Korea in more than three decades, according to the State Department. He was welcomed with flag-waving children, a military marching band and an honor guard 300-strong. He also shared a cringe-worthy awkward kiss with Melania on the tarmac.

Not to be outdone by Abe, South Korean President Moon Jae-in layered on the effusive praise, telling Trump he was “making great progress on making America great again.”

“(There is a) special bond forged between President Trump and myself which I find very meaningful and am grateful to be part of,” Moon said.

In case flattery faltered, Moon had gastronomic delights up his sleeve. Trump, known to be a picky eater who favors well-cooked steaks, once declared that state dinners were wasteful and expensive.

The menu at his dinner in Seoul was nevertheless loaded with Korean delicacies. In addition to serving sole from President Moon’s hometown and shrimp from disputed waters, the highlight was grilled Korean beef rib cooked with a 360-year-old soy sauce, according to CNBC.

After bad weather prevented an impromptu tour of the demilitarized zone that marks the border with North Korea, Trump addressed lawmakers at the National Assembly where he had tough words for Pyongyang. He was applauded no fewer than 20 times and given a standing ovation.

If Japan was fun-filled, and South Korea tasty, then China welcomed its honored guest with magnificent, over-the-top opulence. China’s ambassador to the U.S. called Trump’s trip a “state visit-plus”, a designation that anticipated the ego-massaging in store.

The gilded visit began with a lavish ceremony before the Trumps were escorted to the Forbidden City, the imperial palace from the Ming and Qing dynasties. They were met by President Xi Jinping and his wife Peng Liyuan in matching grey jackets, and together they toured the UNESCO World Heritage site.

The couples enjoyed a tea ceremony, during which Trump showed videos of his granddaughter Arabella speaking Chinese, and then a Chinese opera.

Donald and Melania Trump were given the rare honor of a dinner inside the Forbidden City. It was the first time a foreign leader has dined there since 1949, the founding of the People’s Republic of China, Nikkei Asia Review reported. 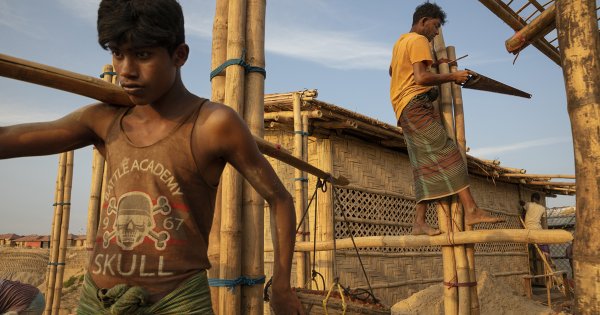 'We’re Not Allowed to Dream.' Rohingya Muslims Exiled to Bangladesh Are Stuck in Limbo Without an End In Sight
EDIT POST