How Robert Mueller Works a Case

Special counsel Robert Mueller leaves after a closed meeting with members of the Senate Judiciary Committee June 21, 2017 at the Capitol in Washington, DC.
Alex Wong—Getty Images
Ideas
By Robert Anderson

Anderson is a managing director at Navigant. He was the assistant director of counterintelligence for Robert Mueller at the FBI from 2011 to 2013

I worked for Bob Mueller for 12 years while he was the FBI director, running counterintelligence, espionage and cybercrime investigations. What I saw recently was a classic law-enforcement response to a suspected Russian intelligence or political-influence operation. And it was classic Bob Mueller. Already, he appears to have uncovered details of a far-reaching Russian political-influence campaign.

Russian spy services use two main methods to run agents. Either they recruit people as traditional assets, where the targets know they’re working for a foreign government. Or they use unwitting agents—people targeted to exploit not just what they know, but who they know. That’s what seems to have happened here. Russian intelligence services have run political-influence operations since the beginning of time, and if you put a seasoned intelligence officer in front of a traditional, unsuspecting businessman, there’s just no match.

The Russian goal appears to have been to use members of the Trump campaign to get at the ultimate target: Donald Trump himself. If I want to spy on Trump, I don’t need or necessarily want to get directly in front of him; I will use sources, or I will use an intermediary known as a cutout. The Russian intelligence services will then dangle something the cutout wants, whether it’s sex, money, drugs or information. In this case, it was Hillary Clinton’s emails.

To uncover just how far the Russian operation got, Mueller will focus his team. He’ll go after the lower-level or lower-ranking guys like George Papadopoulos. He’ll also use the strategy of following the money. In the next weeks and months, you’ll see more indictments. You’re going to see wire fraud. You’re going to see mail fraud. You’re going to see violations of the Foreign Agents Registration Act. You’re also going to see other charges. Moving money around countries to avoid taxes and criminal prosecution are the kinds of violations we saw continuously while I was working counterintelligence and espionage investigations.

A lot of those crimes carry 20-year prison sentences or more for a single violation. Which is why so many people are going to flip and roll over and testify for Mueller. Hard-core criminals aren’t going to talk. You can tell them you’re going to put them in jail for 100 years, but they don’t care. Professional, hard-core spies are not going to talk, because the foreign country they work for is going to retaliate or potentially kill family members left behind in their country.

I would be greatly surprised if Papadopoulos is the only person who’s been cooperating with Mueller. Knowing the way we worked all these other very sophisticated cases for him, he potentially has other informants. And when the people who may be cooperating with the investigation start consensually recording conversations, it’s all over.

That’s why Bob Mueller’s going about this in the way that he is. He knows these guys are not seasoned criminals. And he knows they’re going to roll over on each other. Mark my words, it will start becoming a race to the special counsel’s office. 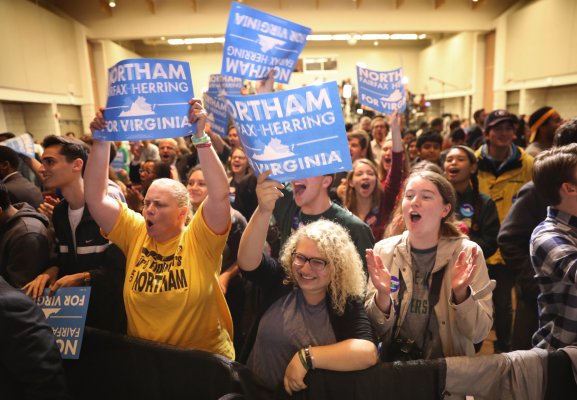 The Resistance Helped Democrats Win on Tuesday. Now They're Turning to 2018
Next Up: Editor's Pick