After hours of playing phone tag, Danica Roem finally answers her cell phone on Wednesday afternoon. She’s sick, she explains apologetically, and exhausted from a night of watching election returns and returning nonstop phone calls from the media. But she is still relentlessly upbeat and willing to chat, both about Tuesday’s victory and the plans she has for Virginia’s 13th district.

Roem, a 33-year-old former newspaper reporter who is also a vocalist in a metal band, made history on Tuesday when she defeated Republican Delegate Bob Marshall, a 25-year incumbent, to become the first out transgender person to win a state legislator’s seat.

When Roem, who was backed by the Victory Fund, takes office in January, she will be the first out trans state legislator in the country. Her victory was made more poignant by the fact that Marshall had sponsored legislation, albeit unsuccessfully, that would have restricted the bathroom options for transgender people in the state, along with a bill that would have banned gay people from openly serving in the Virginia National Guard, and had written a constitutional amendment restricting the definition of marriage to a union between a man and a woman. And of course, pundits deemed Roem’s win a rejection of President Trump’s announcement in July that he intended to reinstate a ban on transgender soldiers serving in the military.

“I understand the national implications of my race; I mean I’m not stupid,” Roem said Wednesday in her interview with TIME. She also pointed out that she was not the only transgender candidate elected Tuesday; Andrea Jenkins and Phillipe Cunningham both broke ground with their elections to the Minneapolis City Council.

“What I hope people across the country are able to see in [our victories] is that transgender people can be really good at doing their jobs in elected office; we can make really good legislators,” she continued. “Just by being in office, our mere presence fundamentally changes the equation.”

Even though she was up against a longtime incumbent, Roem was confident she would prevail, noting that her campaign had knocked on more than 75,000 doors and identified more than 9,000 voters. But, she said, she didn’t officially declare victory until she had received a congratulatory call from former Vice President Joe Biden.

Now that the campaign is over, the work of actually legislating will start in January, when she officially assumes her position, although she says she has already begun conversations with officials about achieving her platform. Roem openly acknowledges that, given her groundbreaking election, she will inevitably walk a tightrope of advocating for the broader LGBTQ community and her constituents.

When it comes to LGBTQ-focused legislation, she said, she wants to focus on health care accessibility, a priority that comes from her own personal experience. “I know what it’s like in Virginia to to be denied coverage… for transitional medical expenses,” she said. “What I want to make sure is that insurers understand that LGBTQ health care is health care.”

But, she continued, she ran on a platform of local issues, like fixing traffic, creating jobs in her district, and raising teachers salaries, and she intends to follow through on those commitments. She talked for nearly three minutes straight during her interview about repairing the district’s water infrastructure, and the methods she was considering to fix traffic lights.

These proposals, she believes, are what will ultimately enable all of her constituents, even the ones who didn’t vote for her, to see that she is on their side.

And she doesn’t seem worried about possible discrimination, whether it be in the state legislature or among her constituents. (During the campaign, Virginia’s Republican Party had paid for a flier arguing that she Roem was making her identity part of the race, according to the Washington Post. The Post also reported Marshall had referenced her with male pronouns).

“I’ve encountered it for ten months,” she said. “And I won anyway.” 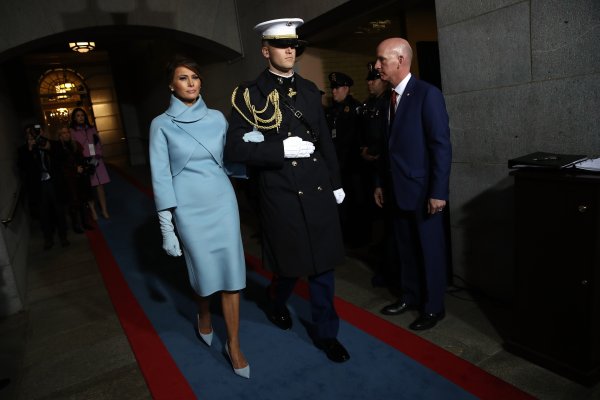 How Melania Trump Has Embraced Luxury Fashion as First Lady
Next Up: Editor's Pick