Two women who captured international attention when they were rescued by the U.S. Navy five months after setting sail from Hawaii defended themselves Wednesday from claims that they lied about some of the details of their tale of being lost at sea.

Jennifer Appel and Tasha Fuiava stuck to their guns as Matt Lauer pointed out holes in their story on the Today show.

Appel and Fuiava – both Americans – were found 900 miles southeast of Japan last month, wildly off course from their planned route of Hawaii to Tahiti.

The women claimed they survived a storm with 25-foot waves that hit early on in their trip. However Lauer pressed them on that claim, saying that the U.S. Coast Guard had no record of a storm of that size in the area.

“I believe the storm advisory that the U.S. Coast Guard did put out… was anticipated to be smaller,” Appel said. “If you were there you would say the same thing that I did, it really felt a lot bigger.”

The pair also faced questions about their claims that they were surrounded by sharks whacking their tails against the hull of their boat. Experts have said that sharks have never been recorded behaving that way, Lauer told the women.

Fuaiva said their encounter with the sharks was “absolutely terrifying.”

Appel said they never activated their distress beacon when the sharks surrounded them because it would have taken too long for them to be rescued. Instead, she said, they prayed to God.

In a bizarre turn to the interview, Appel pulled out a GPS device she said they used on their journey. “Garmin makes a great product,” she said, smiling. She also eagerly interrupted Lauer when he mentioned they used a water purifier on their trip, interjecting with the name of the brand – Katadyn.

Ted Gartner, the Director of Corporate Communications at Garmin International, told TIME: “Garmin only found out about their Today show interview after it aired. To my knowledge, we have not had any contact with either woman, nor have we compensated either of them in any way.” 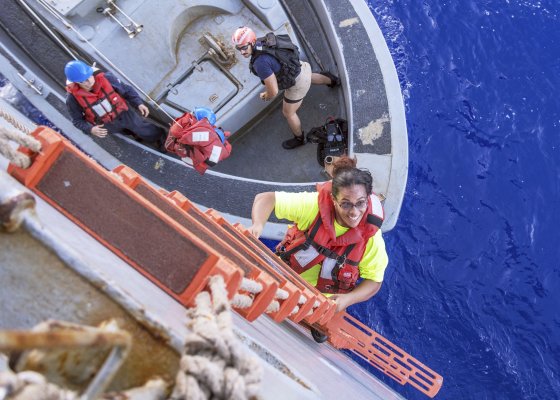 Women Lost at Sea Survived Shark Attacks and Storms
Next Up: Editor's Pick