Joe Keery‘s Steve and Dacre Montgomery’s Billy may play opposing forces on Netflix breakout hit Stranger Things — they’re high school enemies, after all — but as it turns out, the two actors are nothing short of perfectly friendly in real life. In fact, they seem to get along quite well.

For an interview with Good Mythical Morning, a YouTube show, the two sat down (well, upside down) with hosts Rhett and Link to hash things out. Between discussing their preferred fictional superpowers (of the provided choices, Keery opted for a talent that would let him turn things into chocolate, while Montgomery went for a limited time travel option) and sharing their haircare routines, they dug into some unexpected trivia. And when Montgomery was asked his thoughts on his co-star’s hair, he only had good things to say.

They also outed Montgomery for the true meaning of his first name: “Dacre” comes from the Cumbrian dialect, and apparently it translates roughly to “trickling stream.” “Only one other person knows that, and now it’s out,” Montgomery responded bashfully to the news.

The two are also not opposed to working together in the future. The show hosts asked Montgomery if he would hire Keery as a waiter for a fictional restaurant he would run — and his response was an unequivocal positive.

“Of course, mate. I’d be honored to create jobs for the less fortunate,” he joked. 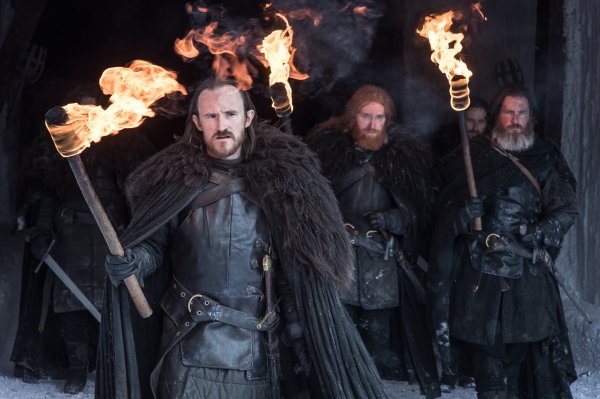 Game of Thrones' Dolorous Edd Just Teased an Exciting Return for Season 8
Next Up: Editor's Pick