Evangelical Pastor: The Church Should Help Keep Guns From Abusers

Members of the FBI and investigators search the scene of a mass shooting at the First Baptist Church in Sutherland Springs, Texas, on Nov. 6, 2017
Larry W. Smith—EP/EFE/REX/Shutterstock
Ideas
By Rob Schenck
Rev. Rob Schenck is an evangelical minister and former activist for Operation Rescue and other national anti-abortion groups. He is president of The Dietrich Bonhoeffer Institute in Washington, D.C., and author of Costly Grace: An Evangelical Minister’s Rediscovery of Faith, Hope and Love.

The motive of the shooter who took 26 lives, injured 20 more and devastated a community by spraying semi-automatic gunfire into a small church sanctuary seemed baffling. We were told by experts that we may never learn what fueled his murderous contempt for people he didn’t know — even babies, pregnant moms and grandparent-types. I wasn’t so mystified. After 35 years as an evangelical minister, I suspected it might be a grudge against somebody in the church — the pastor, an usher he perceived as disrespectful or, more likely, a relative sitting in the pews. Now we know it was the latter, specifically a mother-in-law he had threatened just hours before he committed his unspeakable act.

My hunch proved to be more a keen sense of the obvious, because early in my pastoral work I had seen what domestic violence looks like. I was a youth pastor in a small suburban church when a woman came to the building in great distress. The senior pastor wasn’t in, so she searched me out. She had a black eye and scrapes on her face. Sobbing and trembling, she told me her husband did it and that he had threatened to kill her while waving his gun in her face. I called the police, and they arrested her assailant, but the disturbing encounter never left me. I would see the phenomenon and hear of it again and again, in the many churches I would later travel through as an itinerant preacher. Those experiences taught me just how much a church becomes an extension of the families that make up its congregation, along with the worst dysfunctions those families harbor.

In a household where there is domestic violence, the presence of a firearm makes it far more likely a victim will die. A gun also means there will often be more than one death, as other family members, friends or simply house guests, are taken out in a furious barrage of bullets. In fact, more than half of mass shootings — in which there are four or more gunshot victims, not counting the perpetrator — occur as an act of domestic violence.

In Sutherland Springs, the perfect storm of all these factors traveled outside the home of a man prosecuted and convicted of assaulting his first wife and their child, and into a small congregation that one member described as “a close-knit family.” First Baptist Church, an intimate and loving collection of souls, became the unwitting extension of a toxic family drama that included a history of domestic violence against the perpetrator’s wife and step-child serious enough to merit a criminal conviction and imprisonment. When that first marriage ended in divorce and he married again, a grievance against his second wife’s mother triggered what Texas Governor Greg Abbott indicated was the worst mass shooting in that state’s history.

The abuser, whose second wife had worked at the church and whose in-laws worshiped there, dressed in protective battle gear, carried three guns — all semi-automatic and one a military-grade rifle with an extended magazine — and consummated his rage in a grotesque and grandiose fusillade that took the life of his wife’s grandmother among all his other victims.

The shooting stunned the church world I inhabit. Some of my conservative evangelical colleagues called for arming whole congregations as a way to ward off would-be attackers. But there’s a grave danger in doing so.

Churches are, indeed, families — some large, some small. In fact, Baptists and other evangelicals often refer to their congregations as a “family of God.” As with all families, there is good and bad to church-family life. Just as in any home, relationships in God’s house often experience tension, stress, grudges, offenses and even, in the rare instance, physical confrontation. Introduce a bunch of guns into God’s house — perhaps carried mostly by well-meaning and responsible volunteers, but a few possibly carried by troubled souls nursing angry resentment or undergoing emotional distress or suffering mental illness, and the same noxious, deadly outcomes can threaten the wider “family of God.” According to church shooting researcher Dallas Drake, half of all attackers are known to the church, and 23% of all incidences involved intimate partners; 17% of all perpetrators felt rejected by the congregation, and 12% were mentally ill.

There is a better and far less risky way to protect God’s house — and every house — from deadly violence: stop known domestic abusers from ever getting their hands on the guns that make their fury so fatal. Responsible reporting of criminal histories; sharing of local, state and federal databases; streamlining the administrative process for background checks; closing gun sale loopholes; and rewarding gun dealers who refuse to sell to suspicious and banned buyers would go a long way in preventing catastrophes like the one in Texas that so sickened every reasonable American.

A final and somber lesson that can be learned from this sorrowful moment for First Baptist and the people of Sutherland Springs is that domestic violence and mass shootings are not just tragic and criminal, they are supremely immoral. Murder inside a church sanctuary is as tragic and criminal as it is anywhere else, but the sacred setting affords us a different perspective on such wanton homicide. Just a few weeks before the deadly visitation to First Baptist, a lay leader at the pulpit referred to another mass shooting, in Las Vegas, as “wicked.” While the criminal justice system deals with the legal aspects of domestic violence and mass shootings, and elected officials deal with their political aspects, churches deal with the moral, ethical and spiritual dimensions of such tragedies. Pastors and their congregations have something unique to offer to the urgent and very necessary national discussion we must have on domestic violence and mass shootings: In the end, it’s not simply doing what is legal or politically expedient that matters, but doing what is good and right. 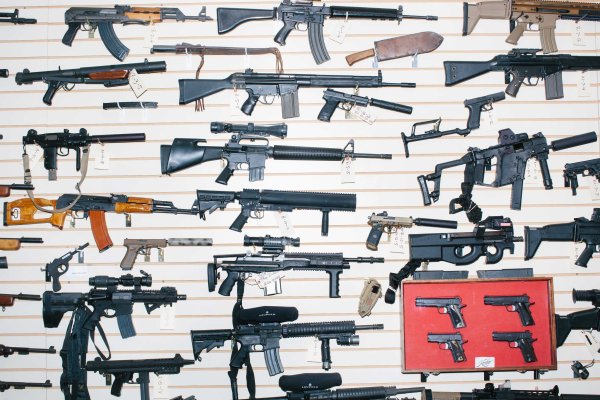 Gun-Related Deaths in America Keep Going Up
Next Up: Editor's Pick