The Trump Administration Ended Protection for Nicaraguans Who Fled Disaster. These Three Countries Could Be Next

The Trump Administration is moving to end a program that allowed some Nicaraguan citizens who fled after a natural disaster to stay in the U.S., as part of an overall stricter approach to immigration.

The decision to end temporary protected status for Nicaraguan refugees means that some 2,500 people will no longer be permitted to live in the United States as of Jan. 5, 2019, and similar protections for other countries could end soon as well.

Acting Homeland Security Secretary Elaine Duke announced Monday that temporary protected status will be extended for around 57,000 Hondurans for six months after the current designation expires in January.

But in a statement, she said that extension was needed to assess conditions in Honduras. Similar decisions on the status of 190,000 El Salvadorans and 50,000 Haitians living in the U.S. have yet to be made, and Vox reports that the State Department believes the status should be ended for all four countries, which account for most of the 300,000 people who have temporary protected status in the U.S. today.

The Trump Administration has taken a hard-line stance on immigration, calling for more deportations, attempting to withhold funding for sanctuary cities and ending an Obama-era program that allowed undocumented immigrants brought to the U.S. as children to avoid deportation.

It appears to be extending this approach to temporary protected status, a longstanding program that allows immigrants to live and work in the U.S. if they cannot safely return to their home countries due to natural disaster or ongoing conflict.

In order to qualify, citizens must have been living in the U.S. continuously when the designation was put in place and they have to have limited criminal histories. Before the program existed, the executive branch had the power to offer some countries “extended voluntary departure” according to the Migration Policy Institute, but unlike temporary protected status, no specific criteria had to be met in order to qualify and designations were often motivated by politics.

Temporary protected status is not a pathway to legal U.S. citizenship — though those who receive it are safe from deportation, they do not receive green cards and they are not eligible to apply for citizenship or legal permanent residence simply because they’re free to stay.

Because the designations are supposed to be temporary, the U.S. government determines whether to extend the protection regularly for periods ranging from six to 18 months, though the status can be maintained for a long as the government sees fit.

Doris Meissner of the Migration Policy Institute says the statute is an effort to find a balance in circumstances where the U.S. has a strong interest, both from a humanitarian standpoint and a foreign policy perspective, in helping people from certain countries without granting them full citizenship. When disaster strikes and the U.S. has an interest in maintaining the stability of the country or region, this protection is an option.

Meissner says that keeping the program temporary can pose a challenge: “This kind of rebuilding when there’s a massive disaster takes time.”

Nicaragua and Honduras, for example, have been under TPS since 1999 when a devastating hurricane hit, killing more than 11,000 Central Americans. Citizens of those countries who have been in the U.S. continuously since Dec. 30, 1998, have been allowed to stay and work as long as they have not committed a felony or two or more misdemeanor offenses and have not committed some drug and national security offenses.

Yale-Loehr says taking the status away has presented political challenges for administrations over the years.

“Individuals from those countries settle here, they have roots, they marry U.S. citizens, they have U.S. citizen children,” he says. “So if you take it away then you’re dividing families and sending some people back to their home country.”

The Trump Administration’s decision to end the status for Nicaraguans and leave thousands of Hondurans and Haitians and El Salvadorans worried about their future has elicited a flurry of negative reactions from immigration advocates and lawmakers who have repeatedly accused the Trump Administration of looking for any and every excuse to give immigrants the boot.

“This administration seems uninterested in keeping families together, in keeping essential workers in critical industries, or in keeping neighboring countries from become failed states,” said Frank Sharry of America’s Voice Education Fund. “They seem to care more about getting applause from the right-wingers who want to drive out immigrants, keep out refugees, ban Muslims and slash legal immigration.”

Meissner says the Administration’s decision to wait could mean something else.

“It does seem to me that they are being forced to grapple with that hard-line position that they’ve taken,” she says. “They’re trying to straddle a line between what they’ve promised to the hard-line constituencies that they feel accountable to and the broader realities of what it actually means to be managing these issues.” 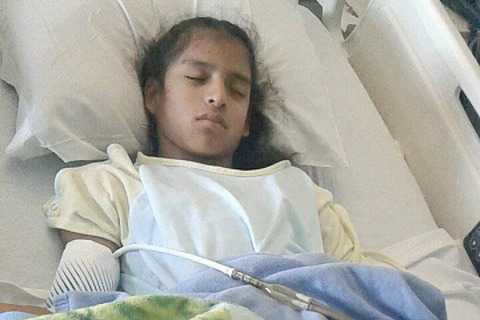 Girl Detained With Cerebral Palsy Cries for Help
Next Up: Editor's Pick