Seth Meyers just took a page out of Japanese Prime Minister Shinzo Abe’s book by using a baseball cap to send a message to President Donald Trump. Abe welcomed Trump to Japan on Saturday with a redesigned, “Make America great again,” hat featuring the slogan, “Donald & Shinzo make alliance even greater,” inspiring Meyers to test the method out for himself.

“Abe is a smart man. He figured out that the only way to communicate effectively with Donald Trump is via hat,” the Late Night host said during the “A Closer Look” segment of Monday’s episode. “Which actually gives me an idea.”

Meyers then donned a white cap with gold lettering that read, “Resign, Donald.”

“Also the hat said, ‘Donald & Shinzo make alliance even greater,'” he added of Abe’s present for Trump. “That sounds like what you would say to a monkey if you were teaching it sign language: ‘Human and ape make friendship stronger!'” 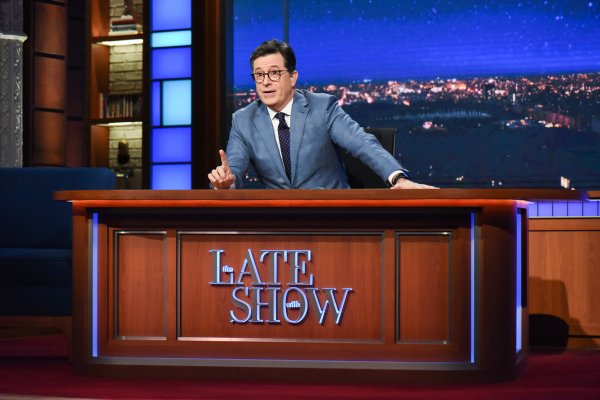 Stephen Colbert Refuses to Accept People 'Doing Nothing' After to the Texas Shooting
Next Up: Editor's Pick