As late-night hosts have done so often due to repeated mass shootings in the United States, Stephen Colbert took aim at inaction in America after a gunman killed 26 people and injured 20 others at a church in Sutherland Springs, Texas on Sunday.

The Late Show comedian took on a serious tone yet again Monday evening as he told viewers he did not have “the slightest idea of how to adequately address the attack in Sutherland Springs, Texas.”

But the comedian found his words quickly as lamented how “nothing gets done” and “no one does anything” after these mass shootings. “And that seems insane,” Colbert said. “And it can make you feel hopeless.”

“Doing nothing, as I’ve said before, is unacceptable,” Colbert said. “But it’s unnatural. It’s inhuman. It goes against our nature. We want to fix things. You want to respond to something terrible like this. Not just now, but anytime in human history.”

“Five thousand years ago, if your village had a tiger coming into it everyday and was eating people, you wouldn’t do nothing,” he continued. “You would move the village, you would build a fence, or you would kill the tiger. You wouldn’t say ‘Well, I guess, someone’s going to get eaten everyday because the price of liberty is tigers.’ You take some action.”

Colbert went on to tell his viewers that they cannot give in to the hopelessness and powerlessness that they feel — as it feeds into “a vicious cycle.”

But rather than doing that, Colbert offered a solution: go vote.

“Vote for someone who will do something, because this is an act of evil and the only thing necessary for evil to succeed is for good men to do nothing.” 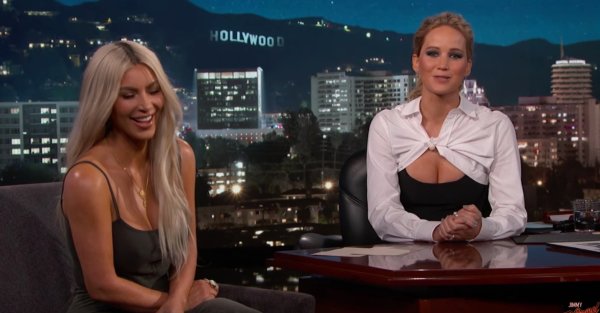 Jennifer Lawrence and Kim Kardashian West Is the Friendship We Deserve
Next Up: Editor's Pick