Vladimir Lenin Biographer: 'He Is the Godfather of Post-Truth Politics'

To signal the storming of the Russian imperial palace, the revolutionary guards were supposed to raise a red lantern over the fortress they had occupied in Petrograd, the city now known as St. Petersburg. It was October 1917, and Vladimir Lenin, the leader of Russia’s communist underground, was finally within reach of seizing power over the largest country in the world. Pacing around the musty rooms of his rebel headquarters, he demanded that his men raise the lantern onto the flagpole and begin the siege at once.

But there was a problem. They’d forgotten to bring a lantern.

One of Lenin’s henchmen went out to look for one. But he got lost, fell into some mud and returned with a purple lamp, which the insurgents could not figure out how to attach to the flagpole. Eventually they gave up on their idea for a signal and started the siege without it.

With a lot of luck, they were successful. But in Lenin: The Man, the Dictator, and the Master of Terror, a new biography of Lenin written by Victor Sebestyen and published on Tuesday — the 100th anniversary of Russia’s October Revolution — it becomes clear that Lenin did not attain absolute power through meticulous planning or the ruthless efficiency of his men. Much of his success seems to have come through his ability to bluff, intimidate and improvise. It’s a story that, for Sebestyen, still echoes a century later. On the eve of the anniversary of Lenin’s revolution, TIME spoke to his biographer about the lucky breaks that helped bring Lenin to power, the legacy he left behind in Russia and the parallels that Sebestyen sees between Trumpism and Leninism.

TIME: The book sheds a lot of light on Lenin’s understanding of good and evil. How would you describe the moral compass that he used?

Victor Sebestyen: It’s all about the means justifying the ends. That’s what it came down to. Anything you do for the cause is morally justifiable. It’s similar to the religious idea of saving souls. It doesn’t matter how many heretics you burn as long as you’re serving that cause.

Didn’t Lenin also see himself, in a sense, as saving mankind?

Yes, he was trying to create a new type of human being, a perfect Soviet person – homo sovieticus – who would get rid of slavery and exploitation. The trouble is that people often have a disappointing wish not to be perfected. They first have to be bullied and coerced and, in the end, terrorized. So that’s what Lenin did. It was a giant experiment. The scale of its ambition was monumental. But that’s what makes the scale of the failure so disastrous.

Your book also suggests that for Lenin, the Russian Revolution was part of a vendetta. He wanted to avenge the death of his older brother, who was executed at the age of 21 for plotting to kill the czar. How much of this was personal to Lenin rather than ideological?

I think there was an element of both. A lot of the legend of Lenin was that of a very cold, very calculating, icy and logical figure. But actually he was moved by emotion every bit as much as ideology. It wasn’t only his brother’s execution that drove him, but the fact that his whole family was shunned after that by the liberal middle class. Lenin never had a kind word to say about the bourgeois after that, and that drove him just as much as his belief in Marxist theory.

As you describe in the book, Lenin came to power by colluding with a hostile foreign power — namely, Germany during World War I — while at the same time making appeals to Russian patriotism and national pride. How did he reconcile these two?

I don’t think it was hard for him to reconcile at all. He looked at the ultimate goal, which was power for him, the power to change the world. That was his morality. It didn’t matter that he was colluding. He would have seen it as a perfectly reasonable political tactic. Of course he had to hide it, because it would have been embarrassing. But he wouldn’t have found the morality troubling one bit. I don’t suppose he thought about it for more than a minute.

Some of the early commentaries on your book have suggested that Lenin’s tactics resemble those of the Donald Trump campaign during last year’s elections. Don’t you think such comparisons are a bit of a stretch?

Of course I didn’t have Trump in mind when I started writing the book. But I did have in mind the power of demagoguery. So I don’t think it’s a stretch at all to make that comparison, especially when you look at [Trump’s] personality. Some of the same things are said about him: He lies shamelessly; he promises anything and everything; he offers very simple solutions to complicated problems. This is very recognizable today.

When it came down to it, Lenin’s messages were often very simple, very pithy, very direct. He would have been fantastic on Twitter. I mean, his slogan — Peace, Land, Bread — it’s a lot less than 140 characters. I really do think he is the godfather of post-truth politics, and I think we’re seeing Leninist stuff going on in our politics quite often.

Steve Bannon, Trump’s former chief strategist, reportedly called himself a Leninist. Do you see a parallel there as well?

I think there’s a big element of Leninism in wanting to destroy everything and start again. That’s the parallel between them. [Bannon and his allies] also want to smash the old system, which to them doesn’t work, and they want to build anew.

Lenin was also obsessed with propaganda. What were his innovations on that front?

He was really obsessed with film and radio. But he would have used whatever the new technology was at the time. I dread to think how he would use the Internet. His style was always to look at the worst of his opponents and brand them that way. That was always in his argument: Exaggerate everything wrong that your opponent does, and then identify them only like that.

The Russian media haven’t paid as much attention as one might expect to the 100th anniversary of the Revolution this week. Nor has President Vladimir Putin. Why is that?

Well, they can’t write [Lenin] out completely, because that would basically mean that everything their parents or grandparents fought for is meaningless, that it’s all wrong. You can’t do that. But trying to come to terms with the communists is not an easy one for Putin. He hates the word revolution. It’s appalling to him. For a leader like Putin, it’s not a great message to send to your people: Hey, you can actually get rid of an autocratic leader quite easily if you want to.

Then why does the cult of Lenin’s disciple and successor, Joseph Stalin, seem to be so much more alive among Russians today?

To them modern history begins in 1945, with victory in the Great Patriotic War, and you can almost forget the years before it. You can write Stalin’s history as the great national leader while barely mentioning that he was a communist. But you can’t ignore that with Lenin.

Lenin’s embalmed corpse is still inside the mausoleum on Red Square, in the center of Moscow, and the question of whether or not to bury him is still a major controversy. Why does Putin seem uninterested in putting it to rest?

He had the chance in 2011, when the mausoleum was in such bad shape that there was a danger of it falling down. That was a chance to get rid of it and bury him. But he said, No. And in the end they spent quite a lot of money propping it up again. I don’t know how much of Lenin’s actual body is left in there. There may be much more wax than an embalmed body.

Last week Putin unveiled a monument in Moscow to the victims of political repressions. He didn’t name and shame Stalin or Lenin during his speech at that ceremony. But what do you make of this step to at least acknowledge that these crimes and purges took place?

That was the first big [monument] with a big state unveiling. But I don’t know how you can do that without mentioning the people who committed the repressions and how it happened. Still, the fact that they put up the monument at all is important. It would be churlish to dismiss it. People have been pressing for something like this to happen in Russia for a while, and even though it might not go as far as one might want, at least it’s something. It was carefully scripted, carefully crafted. But the fact that it’s there at all is a good step. 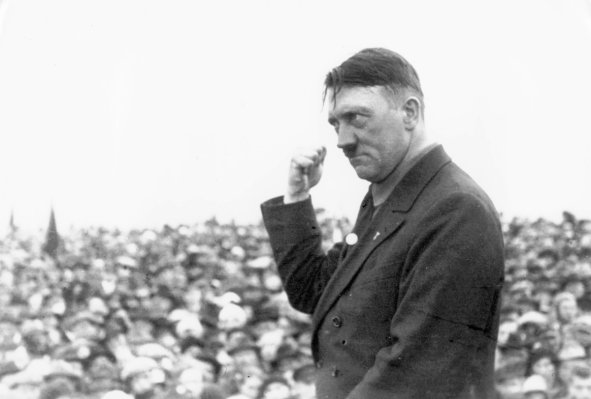 Growing Up Jewish on Hitler's Block: 'Our Neighbor's a Dangerous Man'
Next Up: Editor's Pick