We may never know why a shooter opens fire on a church full of worshipers, or a school full of kids, or a movie theater full of couples. But when it happens, a familiar pattern tends to emerge. The shooter is almost always male, and usually white. He has access to firearms. And often he has a history of domestic violence or violence against women.

According to an analysis by Everytown for Gun Safety, which advocates gun-control measures, 54% of mass shootings between 2009 and 2016 — incidents in which four or more people, not including the shooter, are killed with a firearm — involved domestic or family violence. That just counts shootings in which the victims included an intimate partner or family member; it doesn’t account for shooters who have domestic violence charges in their past, then go on to shoot up a crowd of strangers.

When Devin Kelley walked into a Texas church and opened fire on Sunday, killing 26 and injuring some 20 others, he became yet another data point in this grim statistic. In 2012, while Kelley was serving in the Air Force, he was court-martialed on two charges of domestic assault after he beat and choked his wife, threatened her with a firearm and hit her infant son hard enough to fracture his skull.

This kind of abuse in the home can be a harbinger of violence outside it.

“You could think of domestic violence as a canary in the coal mine for future violence,” says Sarah Tofte, director of research and implementation at Everytown for Gun Safety. “We may not know everything we need to know about why and when it reverberates outside the home, but we know that it does, and we’ve seen it over and over again.”

Several recent mass shooters share Kelley’s record of domestic violence. James Hodgkinson, who injured Republican Rep. Steve Scalise of Louisiana and several others when he opened fire on lawmakers and aides at a baseball practice in June, had been arrested in 2006 for hitting and choking his daughter. Omar Mateen, who killed 49 people in the Pulse nightclub massacre in Orlando last June, had an abusive relationship with his ex-wife, who said he frequently beat her. Robert Dear, who killed three people and wounded nine others when he opened fire on a Planned Parenthood clinic in Colorado in 2015, had been accused of domestic violence by two of his ex-wives. He was also arrested for rape in 1992. (There is no record Dear was convicted, suggesting the charge was ultimately dismissed.)

The shooting at the church in Sutherland Springs, Tex., on Sunday may belong to the latter category. Officials on Monday called the shooting a “domestic situation,” and said that Kelley may have been targeting his mother-in-law, to whom he had been sending threatening text messages.

It’s not clear why so many mass shooters have a history of domestic abuse. Since so many shooters die at the scene of the crime, it may be impossible to ever fully connect the dots. But experts say that certain elements of domestic abuse — feelings of masculine grievance, a desire to be feared, violent rage — are also found in mass shootings.

“What domestic violence and mass shootings seem to have in common are these elements of control,” says April Zeoli, an associate professor at Michigan State University’s School of Criminal Justice.

The vast majority of domestic abusers, of course, don’t go on to become mass killers. Researchers caution that the sample size of mass shooters is too small to make a scientific conclusion about what they have in common or what the link between the two behaviors may be.

“Right now we don’t have enough data to have a pattern,” says Susan B. Sorenson, a professor at the University of Pennsylvania and director of the Ortner Center on Family Violence. “[Domestic violence] might just be one of a series of bad behaviors. The issue might be something else entirely, and we just don’t know.” She calls the trend line a “fake fact,” supported by anecdotal evidence, but not scientific data. “The one thing that we know that they all have in common is that they have access to massive firepower,” says Sorensen. “That’s the single unifying force at this point in time.”

No trend line can ever fully explain why 26 people were shot to death in a church on Sunday. But examining the connection with domestic violence can help make some sense of an act of violence that is otherwise senseless. 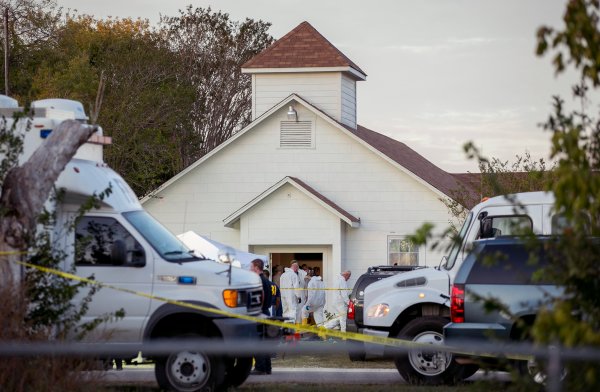 This Is the Deadliest Year for Mass Shootings in Modern U.S. History
Next Up: Editor's Pick