Just one day after arriving in Japan for a 12-day trip across Asia, President Trump was briefed on yet another mass shooting that had happened on U.S. soil: the rampage in Sutherland Springs, Texas, in which 26 people were killed after a gunman opened fire on a church.

This is the third time within five weeks that Trump had to comfort a nation in the midst of a national tragedy. The shooting occurred just days after a terrorist attack in New York City killed eight people and injured a dozen more, and a little over a month after a gunman opened fire on a country music festival in Las Vegas, killed over 58 people and injured over 500.

The President’s response to the tragedy in Texas echoed his reaction to the shooting in Las Vegas, where he offered condolences to the victims and stressed the importance of national unity, rather than his response to the New York City attack, where he immediately began calling for immigration policy changes after the suspect was identified.

News of the shooting began to break Sunday afternoon, at approximately 2 p.m. Eastern. At 3:06 P.M., Trump tweeted: “May God be w/ the people of Sutherland Springs, Texas. The FBI & law enforcement are on the scene. I am monitoring the situation from Japan.”

At 5:54 P.M. Eastern — which was Monday morning in Japan — Sarah Huckabee Sanders told reporters that Trump had been continuously briefed on the shooting and had spoken with Texas Gov. Greg Abbott. “Our thoughts and prayers are with all of the friends and families affected. May God comfort them all in this time of tragedy,” Sanders says in a statement.

“We cannot put into words the pain and grief we all feel, and we cannot begin to imagine the suffering of those who lost the ones they loved. Our hearts are broken. But in dark times such as these, Americans do what we do best: we pull together. We join hands. We lock arms. And through the tears and the sadness, we stand strong,” Trump says in the statement.

The White House also issues a presidential proclamation honoring the victims of the shooting.

Trump subsequently addresses the shooting in remarks to U.S. and Japanese business leaders in Tokyo, reiterating the sentiments expressed in the White House statement. “Our hearts are broken, but in dark times — and these are dark times — such as these, Americans do what they do best: “We pull together. We join hands, we lock arms, and through the tears and through the sadness, we stand strong — oh, so strong,” he says.

By this point after the New York City attack just days earlier, Trump had already said on Twitter that he had implemented policy changes, asking the Department of Homeland Security to intensify extreme vetting procedures after the suspect was identified as an immigrant from Uzbekistan. When a reporter tried to ask Trump about gun control policy after this event, according to a pool report, White House aides asked the media to leave.

But Trump held a joint news conference Monday morning with Japan’s Prime Minister Shinzo Abe, less than 24 hours after the attack, where a question about the shooting and possible gun control measures inevitably came up. He told reporters that mental health is the issue at hand, and that the gunman, who authorities have identified as 26-year-old Devin Kelley, was a “very deranged individual.”

“We have a lot of mental health problems in our country, as do other countries. But this isn’t a guns situation. I mean, we could go into it, but it’s a little bit soon to go into it,” Trump continued. “But, fortunately, somebody else had a gun that was shooting in the opposite direction, otherwise it would have been — as bad it was, it would have been much worse.” 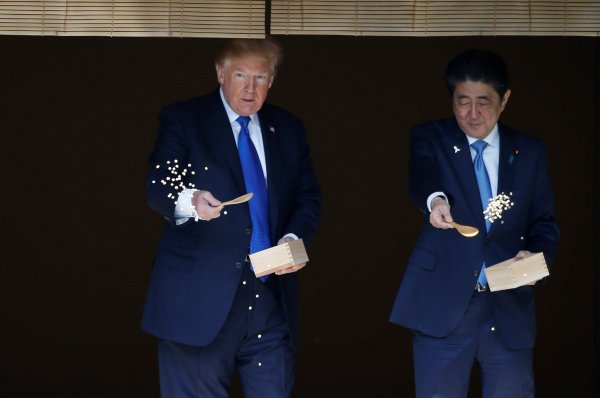 Donald Trump Was Criticized for Overfeeding Fish in Japan. But the Prime Minister Did It First
Next Up: Editor's Pick