50 Years Ago This Week: Cleveland's Carl Stokes Becomes A New Mayor for a New Era

Cleveland’s newly elected Mayor Carl Stokes made the cover of TIME this week, but he was only one example of a striking phenomenon, embodied in Gary, Ind., by Richard Hatcher and in Boston by Kevin Hagan White. In major U.S. cities, citizens were turning out to vote for candidates who represented surprising leaps in civil-rights progress for their cities. And in Cleveland and Gary, those mayors were in fact African-American themselves. As Martin Luther King Jr. put it, the election results were a “one-two-three punch against backlash and bigotry.”

Though many white voters still voted along racial lines, supporters of equality celebrated the use of the ballot box as a non-violent means of making change in the United States. The victories “answer at least in part the growing demands of moderate Negro leaders like the Urban League’s Whitney Young to ‘give us some victories’ to offset the revolutionary preachings of black extremists,” as TIME put it.

While TIME’s coverage of the results was not without its own prejudice — noting the “sophistication and professionalism” of the Stokes and Hatcher campaigns without hiding the extent of the low expectations behind those words — the magazine laid out the many obstacles the three victors had to overcome to reach this point, from the party machinery of Gary to the problems with vote counting in Cleveland. Nor was the magazine shy about praising these events as a good thing for the entire country:

Outsider candidate: Though this issue was still processing the off-year elections of 1967, the big presidential contest of 1968 was on its way — so the national news section took note of Sen. Eugene McCarthy’s fledgling candidacy as a pro-peace figure on the Democratic side, at a time when the option of a sizable anti-Johnson vote was starting to seem worth considering.

Our automated future: In an essay that functioned as a counterpoint to the world’s celebration (or condemnation) of the 50th anniversary of Soviet communism, TIME considered what had happened to capitalism over the prior half-century. Of note to today’s readers may be the amount of space the essay devotes to the positive impact of time-saving devices on the daily lives of Americans, painting a vivid picture of the 1960s housewife whose appliances did so much of her work that she spent afternoons at the theater and evenings watching television. In fact, one famous 1974 study found that housewives spent about as much time on housework each week as they had back in the 1920s — and while today’s American mothers spend substantially less time doing housework than their 1960s precursors did, a lot of that lost time is spent working outside the home, not going to matinees.

Fake news: A hoax had stirred up angst among many American newshounds, after writer Leonard C. Lewin claimed that he had received a leaked copy of a report from a secret group brought together by the U.S. government to analyze what would happen if the world actually achieved “permanent peace.” Finding that war was in fact beneficial to the economy and to the general order of the world, the report offered suggestions for conflicts to fill the gap, running from purposeful “gross pollution of the environment” to the announcement of “giant space-research programs with largely unattainable goals” to distract citizens. Though it was quickly clear the report was satire, it took years for Lewin to confess that he was its author.

Coming up next week: Britain’s Moment of Crisis 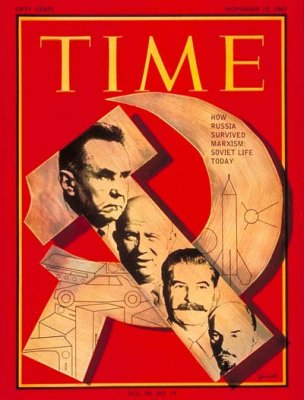 50 Years Ago This Week: In Soviet Russia
Next Up: Editor's Pick