“You knew Notre Dame was Catholic — why did you come?”

We’ve both been asked that question often, especially in light of Notre Dame’s decision to stop coverage of birth control for its students, faculty and staff. Last week the university became the first prominent employer to act on President Donald Trump’s rollback of the Obama-era mandate from the Affordable Care Act that required most employers to cover contraception without a co-payment. If a private organization claimed a religious or moral objection to contraception, a third party insurer would step in to provide it. Therefore Notre Dame — and other private institutions — were never required to pay for contraception if it ran contrary to their religious beliefs. It merely mandated that these institutions provide access to contraception through their health care provider. But President Trump’s recent changes to the ACA gave religious institutions, like Notre Dame, the green light to stop offering birth control altogether based on its religious beliefs or moral objections.

When we decided to enroll at Notre Dame almost four years ago, we didn’t realize that we were relinquishing our right to basic healthcare. Our decision to attend this school was based on wanting to receive a nationally ranked education, follow the legacy of our parents and to be part of the Fighting Irish family — football, dorms and all. Coming from Catholic backgrounds, we both assumed that living on a Catholic campus would not be much different than living in a modern Catholic home — especially because of Notre Dame’s advertised acceptance of all faiths. During our campus visits, they promised us a culture of acceptance and diversity. We believed that we would never be forced to take part in any of the Catholic traditions or teachings that run contrary to our personal choices or beliefs.

But our first experiences attempting to access contraceptive healthcare on campus proved that’s not the case. We both had to wait on a lengthy approval process to get our birth control prescriptions refilled, and had to provide notes from our physicians explaining why we needed the pills: to treat heavy and painful periods. The university health services website explains that: “The University of Notre Dame honors the moral teachings of the Catholic Church. Therefore, for example, University Health Services may prescribe contraceptive medications to treat approved medical conditions, but not to prevent pregnancy.”

Notre Dame requires every graduate and international student to be insured throughout their time here, and encourages coverage for undergraduates. While we’re both privileged enough to still be covered under our parents’ insurance plans, other students are not so fortunate. Many international students and uninsured domestic students often have no other option but to sign up under the university’s plan. Cis-men are the only demographic on campus whose reproductive health will not be directly affected by this change; every other group — including female students of low income backgrounds, graduate students on tight stipends, low-wage earning staff and faculty members with dependents — will be disproportionately affected.

Catholicism is not an excuse to ransack our healthcare. Notre Dame’s interpretation of the Catholic faith fails to uphold the principles of Catholic Social Thought, which emphasizes that “we are all part of one human family — whatever our national, racial, religious, economic or ideological differences.” Notre Dame’s policy change directly discriminates against members of our family: economically, by denying those who cannot afford contraception access without insurance; religiously, by privileging the Catholic faith over others; and ideologically, by setting Catholic morality as the standard for healthcare on campus.

Further, according to Pew Research Center, 76% of Catholics think the Catholic Church should permit birth control. Many of our devoutly Catholic friends here at Notre Dame echo these findings, even demonstrating these beliefs through their personal use of contraceptives. During our time here, we have never felt that students stigmatize hormonal contraception. Students of all ideologies recognize the need for some means of preventing pregnancy. Preserving Catholic identity does not require naïveté when it comes to sexual health.

Notre Dame’s decision sparked a variety of reactions at the school. The most visible, perhaps, has been the outspoken few that led a protest on the steps of the main building (the golden dome), and continue to speak out against this constrictive policy by circulating a petition and vocalizing dissatisfaction in the media. Others have supported Notre Dame and its policy, in part because they believe — incorrectly — that Notre Dame would otherwise be required to pay for contraceptive insurance. Disappointingly, the most common response has been to ignore the issue. In general, students who are not personally affected by this policy change have been unwilling to become involved and act as vocal allies for the students who are losing an important healthcare option.

We’re not trying to force our university to betray its own beliefs. We merely want Notre Dame to respect our bodily autonomy and not hinder our access to reproductive healthcare. We don’t think that’s too much to ask, and that’s why we’re hoping others will stand with us. Birth control is not an issue of religious freedom, as Notre Dame is claiming. Instead, it’s a basic and important form of health care that millions rely on.

Emily Garrett and Molly Burton are seniors at the University of Notre Dame. 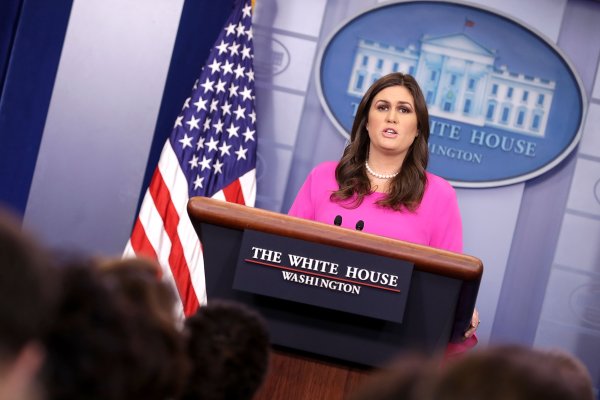 The LA Times Published an Extremely Sexist Description of Sarah Huckabee Sanders
Next Up: Editor's Pick