On Last Week Tonight, John Oliver wanted to talk about jobs, a.k.a., “literally the only reason before anyone gets up before 11 a.m.”

Oliver noted that when it comes to “job, jobs, jobs,” people seem to think it requires repeating the word three times Beetlejuice-style to summon them. Failing that, most states have set up economic development zones to woo job creators, by offering huge tax breaks to companies of all sizes. (By the way, Oliver is clever enough to know that no one really wants to watch a show on economic development, so he had a clip of the Entourage movie at the ready. “All of a sudden, a show about economic development doesn’t seem like the worst thing you could be watching, does it?” he asked.)

Economic development zones have been in the news lately, thanks to Amazon’s hunt for a home for its new headquarters. Cities and states have been making direct appeals to the company via pitches and a surprising number of ad campaigns asking Alexa where the headquarters should go (ads that Oliver dubbed, “almost too hilarious”). In addition to witty ads, New Jersey offered Amazon $7 billion in tax breaks, money that could go to schools, hospitals, etc. all to woo a company that per Oliver has more money than they know what to do with. “How else could you explain the existence of Goliath?” Oliver demands to know, considering it is “a show that literally no one has ever watched.”

Oliver notes, though, that economic development zones haven’t proven themselves to be particularly effective at making jobs. For instance, the state of Kentucky gave up tax revenue from the Ark Encounter Biblical theme park in the hopes of a ripple effect from the jobs, but that has not come to pass. Start Up New York offers companies zero taxes for an entire decade so long as they create at least one new job a year, and that paltry number may be scaled back. According to Oliver, Connecticut earned 7¢ on the dollar it spent on economic incentive programs. Throw money down a hole and hoping it brings prosperity, which Oliver notes is “the exact business model of a wishing well.” 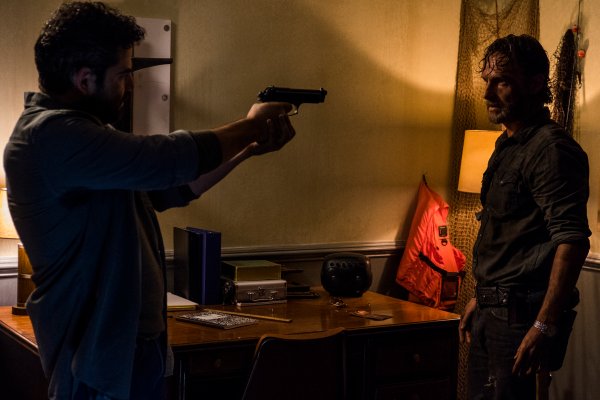 An Ominous Episode of The Walking Dead Questions Who the Real Monsters Are
Next Up: Editor's Pick