A Texas woman allegedly fatally shot her two young daughters in their sleep early Thursday morning, just hours after her husband called 911 to say she was showing potentially suicidal behavior.

Sarah Nicole Henderson, 29, was arrested on Thursday after her husband, Jacob Henderson, found the girls, ages 5 and 7, dead in the living room and called 911, AP reports. Henderson County Sheriff Botie Hillhouse told AP that Henderson had confessed to planning to kill herself, her children and her husband, who was the girls’ stepfather.

“She did try to shoot her husband. The gun malfunctioned. He took the pistol then realized the daughters had been shot,” Hillhouse told AP. “We don’t have a motive at all. We’re still digging, trying to figure out what was going on at that house at the time.”

The convoluted series of events began Wednesday night, when Jacob Henderson called 911 and told dispatchers his wife was acting strange and “freaking out like someone is out to get her,” according to AP. Deputies visited the house about 15 minutes after the call, but the couple refused help. About two hours later, at 2:24 a.m., Henderson made his second 911 call, saying through sobs that his wife had shot her daughters, according to the report.

“She was asleep when I went to sleep last night. I woke up and she came in there said, ‘Babe, I just shot the kids.’ And I didn’t want to believe it. I went in there and they were dead,” Henderson said during the phone call, according to AP.

Hillhouse told AP that Sarah Henderson has been charged with one count of capital murder, though other charges may be forthcoming. She is currently on suicide watch at Henderson County Jail, with bond set at $2 million. 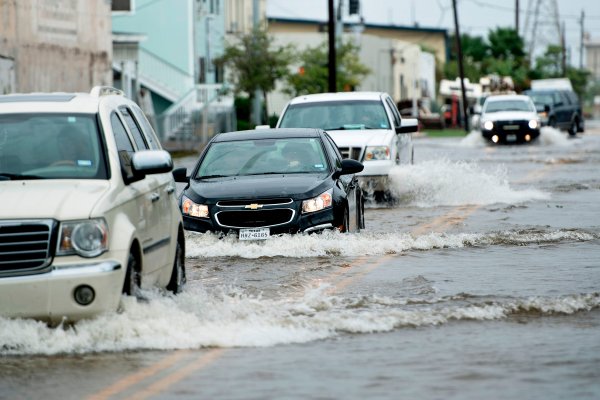 Man Dies From Flesh-Eating Bacteria After Harvey
Next Up: Editor's Pick