U.S. President Donald Trump talks to the media before he and first lady Melania Trump depart on Marine One on November 3, 2017 in Washington, DC.
Mark Wilson—Getty Images
By Tessa Berenson

When Donald Trump was a presidential candidate, he’d often lead his crowds in chants of “lock her up,” arguing that his opponent Hillary Clinton should go to jail. Now that he’s president, his continued calls for Clinton and Democratic officials to be investigated take on a new, inappropriate heft.

Over the past 24 hours, Trump has said multiple times that the Justice Department should investigate Clinton and the Democratic Party. “At some point the Justice Department, and the FBI, must do what is right and proper,” he tweeted, specifically saying they should look into “the deleted E-mails, Uranium, Podesta, the Server.”

This marks a major breach of protocol for how presidents typically interact with the Justice Department. While nested within the executive branch, DOJ operates with some independence from the White House so its work isn’t swayed by political pressure.

“The public needs to have confidence that DOJ chooses to investigate and prosecute a particular person not in order to please the President or others in the White House, but rather because the interests of justice are furthered by that use of prosecutorial powers,” says Jonathan Biran, a former federal prosecutor.

In a January memo, Trump’s counsel Don McGahn wrote that the White House should communicate with the Justice Department on “matters that do not relate to a particular contemplated or pending investigation or case.” This and other rules concerning communication between Justice and the White House, McGahn wrote, must be followed “in order to ensure that DOJ exercises its investigatory and prosecutorial functions free from the fact or appearance of improper political influence.”

“If a DOJ prosecutor or FBI agent received information warranting an investigation of Clinton or Democratic entities, the prosecutor should move forward with that investigation based on her considered judgment,” says Andrew Wright, associate professor at Savannah Law School. “That decision should not be made because Donald Trump wants it done or it would make his political life easier.”

Now, even if the Justice Department were to determine on its own that it should investigate Clinton or the Democratic National Committee, Trump’s comments could make a legitimate investigation harder to carry out. “There [would be] an appearance that you’re doing it for political reasons,” says Solomon Wisenberg, who was in the independent counsel’s office for the Whitewater investigation during Bill Clinton’s presidency.

The Justice Department declined to comment for this piece.

It’s worth nothing that the FBI did investigate Clinton’s use of a private email server while she was Secretary of State, and in the summer of 2016, former FBI chief James Comey said the agency did not recommend bringing any criminal charges against her. But Trump’s treatment of Comey marks the most significant example so far in his presidency of his willingness to smudge the lines traditionally separating the Justice Department (of which the FBI is a part) from the West Wing.

In May, Trump fired Comey, ostensibly because of his handling of the email investigation but in part, critics worried, because of the investigation into Russian influence in Trump’s campaign. According to congressional testimony by Comey, the president had told him, “I expect loyalty.” The president has the power to fire the head of the FBI, but it had only happened once before in American history.

It’s unlikely that Trump’s tweets will have any undue sway over the Justice Department lawyers. But the behavior is “troubling,” says Wisenberg, “particularly when you have a president like Trump who doesn’t understand anything about the norms of these things.” 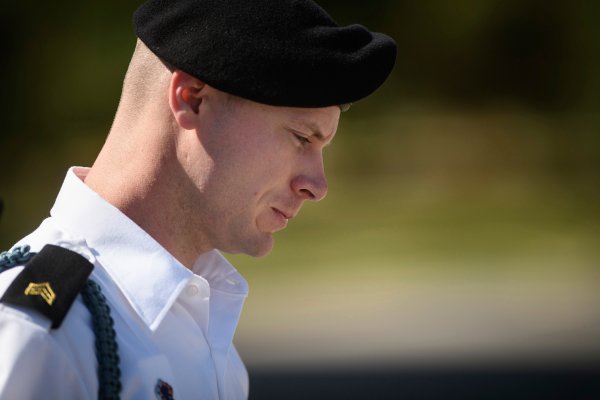 Bowe Bergdahl Deserves Our Empathy
Next Up: Editor's Pick