What the Thor: Ragnarok Post-Credit Scenes Mean for the Future of the Marvel Universe

If you’re a Marvel fan you know by now that no matter how badly you need to use the bathroom or add time to your parking meter, you do not get up at the end of a Marvel movie. You sit patiently in your seat, watch the credits roll and wait for the crucial post-credit scenes. These scenes usually feature easter eggs and hints of what is to come in the studio’s future superhero movies. Thor: Ragnarok is no exception.

Ragnarok ends with the destruction of Asgard, Thor’s home planet. Thor and his brother Loki lead the evacuation of Asgard onto a large ship and debate where they should take their people to settle. Thor suggests Earth — presumably he’s unaware that his superhero friends are engaged in a civil war. So Thor will be happily reunited with the people of Earth, and all the Asgardians will just settle in Norway, right? Sadly, post-credits scenes suggest things won’t end so well for Thor’s people.

However, the two post-credits scenes at the end of Thor: Ragnarok do set up the events of the next Avengers film, Infinity War. Here’s what happens:

In the first after-credits scene, Thor and Loki are merrily on their way to earth when they are intercepted by a large, dark ship. At first, Marvel fans might suspect that this vessel is piloted by the Guardians of the Galaxy because they know that Thor will join forces with the intergalactic team in Infinity War. But that’s likely not the case.

The Guardians were last seen piloting an entirely different ship, and an Infinity War clip revealed exclusively at San Diego Comic-Con showed the Guardians meeting Thor in a different way. In that scene, the Guardians are flying through space when they see some floating debris. They speculate that a ship was destroyed in that spot. Then Thor, floating alone through the galaxy, hits their windshield. They pull the God of Thunder into their ship.

Fans can glean from that clip that whoever is piloting the evil-looking ship at the end of Thor: Ragnarok goes on to destroy or at least severely damage Thor’s ship. Thor is thrown overboard and picked up by the Guardians.

So the likely pilot is Thanos — or at least one of his minions. We know from the post-credits scene in Avengers: Age of Ultron — seriously, never leave the theater early at Marvel movie — that Thanos has set out to collect Infinity Stones, the powerful gems that have shown up across the Marvel Universe and lend their owner incredible power.

Why would he destroy ship? Probably because Loki has an Infinity Stone with him. When Loki was setting the Apocalypse loose in order to save the Asgardian people and destroy Hela, the Goddess of Death, he stops for a second to look at the Tesseract or Space Stone. Given his history with the stone — and his proclivity for mischief — there is no way that Loki left that room without taking the Space Stone with him. Now Thanos has come to collect.

Whether Loki tries to save Thor or sides with Thanos and quickly gives up the stone is unclear. But we do know that Loki has some role to play in the plot of Infinity War.

MORE: How Thor: Ragnarok Sets Up What’s Next in Avengers: Infinity War

Director Taika Waititi made it his mission to lighten up the self-serious God of Thunder in Ragnarok. So it’s no surprise that he leaves the audience with laughs. In the movie, Thor is taken captive and forced to fight as a gladiator on a strange planet run by The Grandmaster (Jeff Goldblum in turquoise eye makeup). Eventually, Thor and his buddies help stage a revolution against the Grandmaster in order to escape.

In the post-credits scene, The Grandmaster stumbles out of his ship to face a very angry mob. “The revolution has a been a huge success!” he yells, trying to win their favor before declaring the fight “a tie.”

While the scene is mostly played for laughs, we do learn one important fact: The Grandmaster survived the revolution. That means Goldblum could be tapped for another Marvel movie: Perhaps Infinity War? 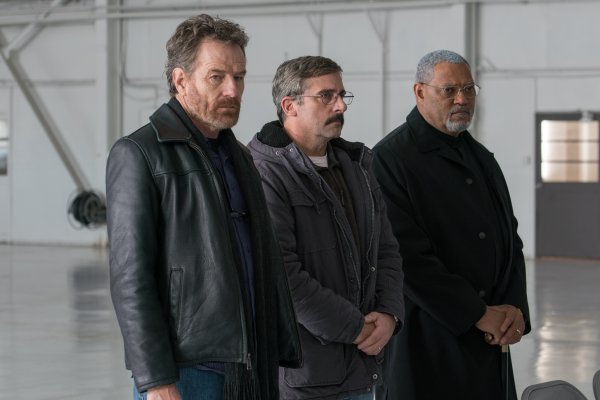 'Last Flag Flying' Makes Its Points Loudly If Not Clearly
Next Up: Editor's Pick