Meet the Winners and Losers of the GOP Tax Reform Bill

Corporations, the wealthy and some parents would be helped by the Republican tax reform plan unveiled Thursday, while real estate agents, residents of high-tax states and people with serious illnesses would be hurt.

After last-minute wrangling among lawmakers, House Republicans unveiled their long-awaited tax reform bill with a promise to do away with the current system in favor of one they said would be simpler.

Known as the Tax Cuts and Jobs Act — another last-minute change to a bill that was possibly going to be pitched as the Cut Cut Cut Act — the legislation would reduce the number of tax brackets from seven to five, immediately cut the corporate tax rate to 20% and nearly double the standard deduction for individuals and married couples in exchange for limiting or eliminating several popular deductions.

Republicans pitched the bill as primarily benefiting the middle class, pointing to two key provisions: the doubling of the standard deduction for individuals and married couples to $12,000 and $24,000, respectively, and the creation of a new “family tax credit.”

But the decision to move toward a larger standard deduction could affect many Americans who currently enjoy several popular deductions that would be phased out as well.

Real estate agents won’t be happy with the proposed changes to the mortgage interest deduction, which would only apply to new mortgages for homes costing up to $500,000. Existing mortgages would be exempt, but that also means homeowners in some high-end markets like New York City and San Francisco could effectively be locked into their existing homes, since they would lose a valuable tax deduction if they moved.

A deduction that benefits Americans with serious illnesses who face hefty medical expenses every year is also eliminated under the current plan, but Brady said he is looking forward to input from the Senate on that issue.

The bill as outlined on Thursday steered clear of changes to taxes on retirement accounts and the Affordable Care Act, which had been both maligned and floated by President Trump in recent days. On Wednesday, Trump tweeted that a repeal of the individual mandate within the Affordable Care Act should be included in the bill as a way to provide relief to middle class families, an idea Republican Sen. Tom Cotton proposed in the upper chamber. Brady, however said earlier this week he wanted to avoid what could amount to a poison pill on the legislation and focus on taxes. There was also concern that pre-tax dollars that are put into popular retirement savings plans would be affected under the bill, but a summary of the bills makes clear those limits are untouched.

The bill includes several provisions that would aid higher-income Americans. It would double the amount of money that is exempt from the estate tax — currently $5.6 million for an individual and over $11 million for married couples 2018 — and eliminate the tax altogether in six years.

“Damage from the estate tax isn’t for those who pay it, the damage is on everything our family owned businesses and farms have to do to avoid it,” Brady said. “This hits family-owned farms and businesses the most.”

According to the Tax Policy Center, the bulk of those paying the estate tax are the top earners in the U.S. — only about 80 small farms and businesses will end up paying an estate tax in 2017.

The bill also includes a repeal of the Alternative Minimum Tax, which the Tax Policy Center says primarily impacts households with income above $200,000 and it also disproportionately impacts those in high-tax states. Brady said Monday that could be a boon for Republicans who are hoping to get lawmakers from those states on board with the plan.

Lawmakers from states like New York, New Jersey, and California have expressed concern that their constituents would take a hit under the plan because of the elimination of most state and local tax deductions. Twenty House Republicans voted against the budget, which serves as a vehicle for this bill, because of that plan.

While the Tax Cuts and Jobs Act keeps the property tax deduction people would only be able to write off $10,000 in taxes. Rep. Chris Collins of New York told a small gaggle of reporters on Wednesday that cap could mean a loss of “six to eight” votes.

House Republicans have also proposed lowering taxes for some businesses known as “pass-through” businesses, but they are including proposals that they say will restrict how individuals can benefit from it in an effort to curb potential abuse of it. They are also proposing a 10% global minimum tax that would apply to money companies earn across the globe.

Though the bill was released in all its glory on Thursday, the process to get it to the President’s desk has only just begun. There’s an uphill battle within the House and the Senate, which is expected to release its tax plan soon. Outside groups have already begun flagging concerns they have with parts of the bill and money will surely pour in to both champion and denigrate parts of the proposal.

On Thursday Ryan said members are laser-focused on passing a tax overhaul.

“The political will among the members here in the House is iron clad to get this done,” Ryan said. “We’re making things so simple that you can do your taxes on the form the size of a postcard. This is it.” 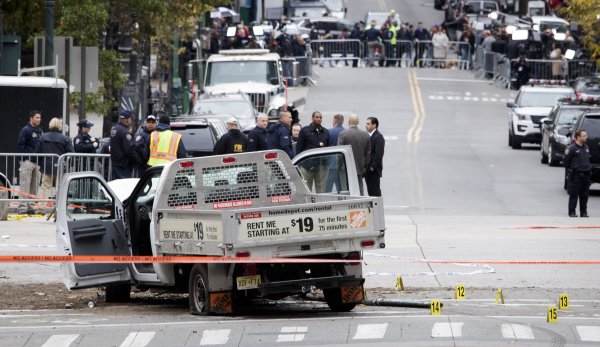 Kirsten Gillibrand Has a Simple Idea to Stop the Next Terror Attack
Next Up: Editor's Pick