How China’s Economy Is Poised to Win the Future

President Trump has plenty of work to do during his 10-day tour of Asia in November. In Japan and South Korea, he must reassure nervous allies that an “America first” foreign policy does not mean the U.S. has ceded regional dominance to China. In Vietnam and the Philippines, he has to communicate deep U.S. interest in balancing China’s influence in Southeast Asia.

But the most important stop will be in Beijing, where Trump will meet President Xi Jinping for the first time since the Chinese leader heralded a “new era” in global politics at his pivotal party congress in October. Trump will try to project strength while calling for closer cooperation on North Korea and on resolving trade disputes. But he arrives at a moment when China, not the U.S., is the single most powerful actor in the global economy.

The Chinese authoritarian-capitalist model wasn’t supposed to survive in a global free market, let alone thrive. As recently as five years ago, there was consensus that China would one day need fundamental political reform for the state to maintain its legitimacy and that China could not sustain its state capitalist system. Today China’s political and economic system is better equipped and perhaps even more sustainable than the American model, which has dominated the international system since the end of World War II. While the U.S. economy remains the world’s largest, China’s ability to use state-owned companies to boost the party’s domestic and foreign influence ensures that the emerging giant is on track to surpass U.S. GDP in 2029, according to the Center for Economics and Business Research.

The U.S. is hardly irrelevant. The dollar remains the global reserve currency, an exorbitant privilege that will likely last for years to come. Wealthy Chinese continue to invest in U.S. real estate and send their kids to U.S. schools. But the pillars of U.S. power–its military alliances, its trade leadership and its willingness to promote Western political values–are eroding.

At the same time, the leaders of other emerging powers–not just Russia but also democracies like India and Turkey–are following China’s lead in building systems where government embraces commerce while tightening control over domestic politics, economic competition and control of information. This process has been in motion for many years, but China now has its strongest leader in decades, and the U.S. has its weakest. Americans and Europeans have always assumed that the long arc of human development bends toward liberal democracy. What if they’re wrong?

There’s an old, likely apocryphal story that, during a visit to China several decades ago, economist and free-market fundamentalist Milton Friedman visited a site where workers were building a canal. When he asked his host why the workers were using shovels and wheelbarrows rather than modern equipment like tractors, he was told that the project’s purpose was to create jobs. If it’s jobs you want, Friedman asked, why not give the workers spoons instead of shovels?

Times have changed since then, but not all that much–the reality remains that it is far easier for Xi to command Chinese officials to create and protect jobs than, for example, it was for Barack Obama to persuade Republican lawmakers to bail out the U.S. auto industry in the wake of the U.S. financial crisis. Beijing offers direct financial and political support for its strategic industries, 365 days a year. The government protects Chinese companies charged with stealing the intellectual property of foreign firms. It provides direct funding for strategic sectors. It writes laws designed specifically to help them grow. And it engages in industrial espionage and cyberattacks against foreign competitors.

This level of protection is especially important in an age when the most important variables globally will be the pace and scale of technological change. Automation has already upended labor demographics in the developed world; 87.8% of manufacturing jobs lost in the U.S. between 2000 and 2010 were the result of automation and improved technology, according to a 2015 study by Ball State University. Technological upheaval is now poised to displace hundreds of millions of workers in the developing world, including many who have only recently risen from poverty. But the Chinese government’s finer control of its economy will help absorb some of the shock that will have bigger effects elsewhere.

Take China’s big three oil companies. CNOOC, PetroChina and Sinopec have each benefitted from large infusions of cash from the state via state-owned banks. Similarly, the heavily indebted state-owned chemical giant ChemChina was able to acquire Swiss firm Syngenta and its biotech assets for $43 billion only because the Chinese government made clear that food security in China is a strategic priority–and that the state would guarantee ChemChina’s financial stability. Private firms benefit too. Telecoms firm Huawei is poised to dominate the global deployment of fifth-generation mobile infrastructure, particularly in developing countries, thanks to a hefty credit line from China Development Bank, which lends in support of the Chinese government’s policy agenda. Trump can only envy the Chinese government’s ability to use policy and subsidy to decide which companies will win and which will lose–and the power that that reflects on the ruling party.

But jobs and industry are not the only ways that China’s leaders ensure political unity. They also use technology to bolster the ruling party’s political control in ways that Western governments can’t. As we embark on the world’s biggest social experiment ever–entire generations interacting with society primarily through smartphones–we’ll see enormous power for institutions that have the means to control those interactions and the data they produce.

In the West, companies use algorithms to expand profitability, while citizens use them to become better-informed consumers. In China, companies use algorithms at the behest of the government to ensure that citizens remain within the rules of order set by the political leadership. There is no better example of this than the “social credit system” that China is developing, a system that allows state officials to assess a person’s financial data, social connections, consumption habits and respect for the law to establish the citizen’s “trustworthiness.”

Imagine a credit report that reveals whether you’ve ever committed a crime, been caught cheating on a test, been drunk in public, missed an alimony payment, been fired from a job, signed a petition, visited undesirable websites, been photographed at a protest or written something on the Internet that led administrators to question your loyalty to the state. A good social credit score could lead to a promotion, a raise, a better apartment, admission to a good school, access to state-approved dating websites, better stores, better doctors, the right to travel, a more generous pension and important opportunities for your children. A bad score could put you in jail.

The potential for intrusion into 1.4 billion personal lives is unprecedented. Published information on the plan by China’s State Council says it is intended as a safeguard against, among other things, “conduct that seriously undermines … the normal social order” and “assembling to disrupt social order [and] endangering national defense interests.” The plan’s ultimate purpose, according to Chinese officials, is to “allow the trustworthy to roam everywhere under heaven while making it hard for the discredited to take a single step.” For Westerners, this is a shocking abuse of state power and an unthinkable invasion of personal privacy. In China, these are the tools officials will use to build a more “harmonious society.” China’s largest dating site, Baihe, already allows users to display their credit scores in their dating profiles.

But China’s most important ambitions are in artificial intelligence. This is the space race of the 21st century, but one with a much more direct impact on the lives and livelihoods of citizens. The biggest technological breakthroughs in AI will demand the kind of planning and investment that the U.S. once poured into the Manhattan Project or the race to the moon. However, the U.S. government no longer has the political will to muster this kind of sustained long-term commitment and has outsourced innovation to Silicon Valley. U.S. tech firms will have the advantage if the race to develop AI depends mainly on experimentation and innovation in multiple areas at once. But China is the better bet to win if the decisive factor is depth of commitment to a single goal and the depth of pockets in pursuing it. The one certainty here is that Washington–and the representative democracy and free-market capitalism it champions–is not in the race.

To argue that China’s system is better able to withstand the shocks of today’s world is not to claim that it’s better for those who live within it. Political repression and the lack of rule of law in China create injustice at every level of society. As local governments and companies in China struggle with debt, the state’s ability to bail them out is not inexhaustible. Despite its investments in new technologies, automation and machine learning will displace large numbers of Chinese workers over time, creating long-term risks of social unrest. But for the foreseeable future, China is likely to remain strong and stable. Its international presence will continue to grow, and it is not short of ambition. In October, Xi said it was time for China to “take center stage in the world.”

The China striding into that spotlight is not guaranteed to win the future. In this fragmenting world, no one government will have the international influence required to continue to set the political and economic rules that govern the global system. But if you had to bet on one country that is best positioned today to extend its influence with partners and rivals alike, you wouldn’t be wise to back the U.S. The smart money would probably be on China. 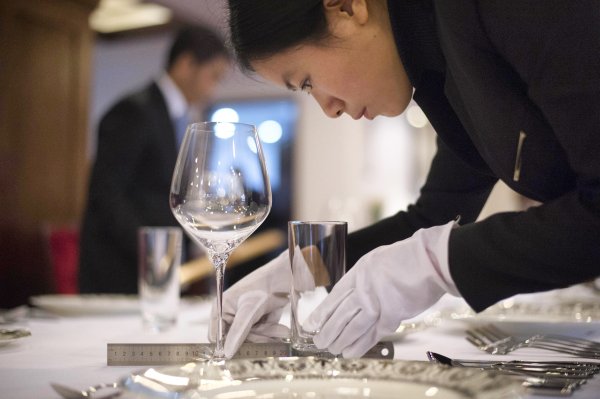 In China's Booming Butler Schools, Only the Best Will Do
Next Up: Editor's Pick