The Rise and Rapid Fall of Paul Manafort

For more than a decade, Paul Manafort rode high. He bought homes and furnished them with pricey antiques and carpets. He paid for much of it using millions of dollars in undeclared overseas bank accounts, money he had made advising Ukrainian allies of Vladimir Putin, according to charges filed against him by special counsel Robert Mueller.

Manafort had earned it, in a way. When he went to work in Ukraine in 2005, his primary task was to burnish the image of a presidential hopeful named Viktor Yanukovych. Yanukovych had the backing of the Kremlin but was oafish and inarticulate, and had served jail time in his youth for theft and battery in his gritty home region of Donetsk, in eastern Ukraine. Manafort’s job, in the words of a U.S. embassy cable sent from Kiev to Washington in 2006, was to give an “extreme makeover” to Yanukovych and his Party of Regions, which the cable referred to as “a haven for Donetsk-based mobsters.”

Yanukovych and Putin were determined to stop Ukraine’s accelerating move away from Russia toward alliances with the West. With guidance from Manafort and backing from Moscow, the Party of Regions made astonishing progress over the next five years, culminating in Yanukovych’s successful bid for the presidency in 2010. Among his first official acts was to legally bar Ukraine from seeking NATO membership. Among his unofficial ones were to amass an enormous fortune and launch a crackdown against political opponents. “It’s normal practice,” Yanukovych told TIME in June 2012, in reference to his jailing of an opposition leader. “Today the President of Ukraine has the highest ratings of any politician,” he added.

Manafort continued to earn money from Yanukovych and his allies for several more years as the country descended into conflict. After a pro-Western uprising forced Yanukovych from power in 2014, the National Anti-Corruption Bureau discovered a secret ledger of off-the-books payments from the Party of Regions. Manafort’s name appears in the document 22 times, with payments worth $12.7 million designated for him between 2007 and 2012. Manafort has denied receiving any illicit funds.

Even after the revolution of 2014 turned violent, with police shooting dozens of protesters in the streets of Kiev, Manafort continued to assist his Ukrainian patrons. He helped the party rebrand itself after its leaders were blamed for the bloodshed, which ultimately took more than 100 lives. But the gig was coming to an end; Yanukovych and his closest allies fled in February 2014 to Russia, where Putin guaranteed their security. After the Party of Regions broke apart in the fall of the same year, Manafort advised some of its former members on how to win seats in the postrevolutionary parliament. Fortunately for him, just as his Ukrainian cash cow was drying up, new opportunities were on the way.

Manafort came to the attention of Trump’s insurgent campaign in March 2016, just as some Republican Party operatives were looking to block a Trump nomination by peeling off delegates at the nominating convention in Cleveland. The prospect of the first convention floor fight since the 1976 brawl between Gerald Ford and Ronald Reagan boosted Manafort’s credentials: he had played a role in that battle, helping the Ford camp stifle Reagan.

But just who is responsible for bringing Manafort on board remains something of a mystery. At least three versions are offered by sources in Trump’s orbit. In one, Trump son-in-law and White House senior adviser Jared Kushner proposed Manafort. Ivanka Trump’s husband saw troubles ahead at the convention and urged his father-in-law to enlist someone who knew the rules. Tom Barrack, a longtime Trump pal and fellow billionaire, may also have played a role, passing on Manafort’s memos to Trump and endorsing him as a “killer,” high praise in Trump’s world. (It didn’t hurt that the operative was offering his services for free.)

Others blame Roger Stone, an on-again, off-again Trump adviser. Stone and Manafort learned the art of political propaganda as business partners in a firm that helped clients in regimes in Somalia, Zaire and the Philippines in the 1980s and ’90s. Still another version has it that Manafort charmed his way in on his own, convincing Trump family members Kushner, Ivanka and Donald Trump Jr., that he could sideline the increasingly besieged campaign manager Corey Lewandowski.

Or maybe Manafort was just someone Trump knew. Manafort and Stone had lobbied for Trump back in the 1980s, when the mogul sought, among other things, a deeper dock in Atlantic City so he could park a yacht. In the coming years, their firm worked on projects big and small for Trump. Manafort bought a Trump Tower condo in 2006 for $3.7 million.

Much of what Manafort did at the campaign while he was there also remains a mystery. But the controversy over his appointment began immediately. Soon after he was announced as the campaign’s delegate wrangler, reporters started digging into his business dealings, including in Ukraine, resulting in a series of negative stories. Manafort attended a June 2016 meeting with a Kremlin-linked lawyer at Trump Tower, where Russia’s efforts to help the campaign were to be discussed, postelection reports revealed. And at the convention, the Republican National Committee’s official platform received changes that seemed to benefit Manafort’s pro-Russian Ukrainian clients.

However Manafort came in, it wasn’t long before he was on his way out. By August, Trump wanted a change. Manafort was gone on Aug. 19, 2016. In Trump’s telling, Manafort was someone who “was with the campaign, as you know, for a very short period of time.” After Manafort pleaded not guilty to nine counts on Oct. 30, his lawyer released a statement denying any collusion with Russia and praising Manafort’s work “to further democracy and to help the Ukrainians come closer to the United States and to the E.U.” Motivations here, unfortunately for Manafort, matter less than bank records. 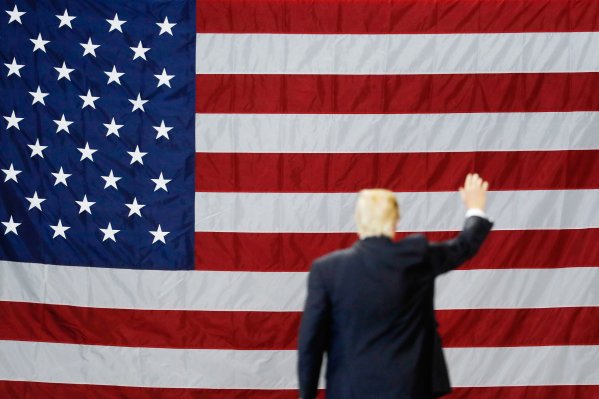