Writer-director Greta Gerwig’s semiautobiographical Lady Bird is both generous and joyous, but when it stings, it stings deep. At one point, Saoirse Ronan, as disgruntled high school senior Christine, begs her mother, Laurie Metcalf’s Marion, for a magazine at the supermarket: “It’s only $3! I’m having a bad week!” Marion brushes her off, and it could be the usual mom move of just saying no–until she reaches the cash register and you realize that this respectable-looking suburban woman can barely cover the family groceries.

There’s no lingering, sentimental camera work, no telltale bummer music. Metcalf’s face betrays nothing so obvious as frustration or anxiety. Instead, it’s as if every molecule of her body has been, out of necessity, trained to count money. Meanwhile, when you’re a teenage girl wanting a magazine–so you can look at makeup ads, or pictures of rock stars, or fashion spreads featuring clothes you can’t afford but want to ogle anyway–it is among the world’s most straightforward, achievable desires. This measly dream costs $3, and Christine’s mother won’t–can’t–let her have it.

There are tons of movies about coming of age in the suburbs, but few are as astute as Lady Bird when it comes to class. Even so, the movie–set in Sacramento circa 2002–is more universal than it is insular. Gerwig knows, as her young heroine doesn’t yet, that what really defines you as an emerging grownup is how you handle everything else clustered around issues of money. The first love who’s all sorts of wrong yet also perfectly right, the desire to hang with the cool crowd only to realize that your longtime, uncool friends are a thousand times better and, perhaps most complicated of all, the slow crawl toward a truce with the parent who drives you crazy.

Gerwig has a sense of humor about even fairly painful subjects. She doesn’t make filmmaking, or filmgoing for that matter, seem like drudgery. Ronan’s Christine–the movie’s title comes from the new name she’s given herself, a misguided teenage attempt at reinvention–attends a Catholic school she can barely tolerate, though this isn’t one of those joints filled with awful nuns. The great Lois Smith appears as Sister Sarah Joan, aged but groovy, who looks at the awkward raspberry tint of Christine’s hair and the half-affected scowl beneath it and sees nothing but promise.

Christine finds that very nice first boyfriend (Lucas Hedges) and a less-than-satisfactory second one (Timothée Chalamet). But mostly she fights with her mother, and if words were bayonets, blood would flow. Meanwhile, Christine’s beloved, depression-prone dad (Tracy Letts) looks on helplessly, though he does become her partner in crime in pulling off her one big goal.

Lady Bird‘s performances are all lovely, which you could chalk up to smart casting. But maybe it’s also that Gerwig–who previously co-directed, with Joe Swanberg, the 2008 Nights and Weekends–is kind of like the cartoon Sleeping Beauty, good at breezily orchestrating the special gifts of each bird in the forest. She’s certainly attuned to Ronan, who resembles a Leonardo da Vinci Madonna, if you were to add a few angry teenage thunderbolts and a scattering of mild acne. Beneath all that free-radical exasperation, Christine’s face is radiant, open, alive. It’s only when she gets everything she ever wanted that she’s hit by the weight of all she’s left behind. That’s usually how it works around age 18. Lady Bird puts you right back there, no matter how many years have elapsed. 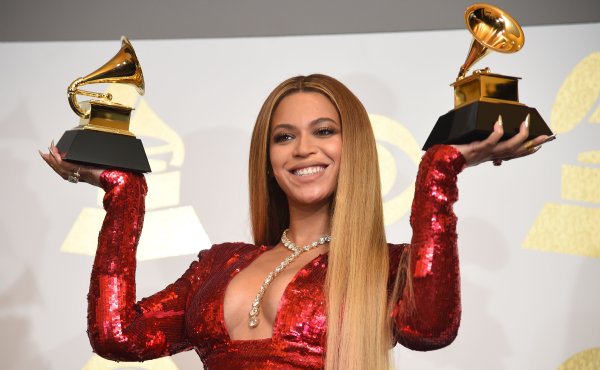 Beyoncé to Star in The Lion King Remake
Next Up: Editor's Pick