What to Know About the Asylum Seeker Standoff on Manus Island

Last week, an Australian-run offshore detention center housing hundreds of asylum seekers was closed down on Manus Island, a small key of Papua New Guinea. New facilities set up to receive them, however, were deemed unacceptable by both the asylum seekers and humanitarian experts — including officials representing the U.N. refugee agency. The inhabitants refused to move, mostly out of fear of attack by their new neighbors upon being transplanted.

Now, a humanitarian crisis has developed as the refugees and asylum seekers — all men from various countries throughout the Middle East and Asia — lack basic services such as food, water and electricity. Some have begun digging deep wells, hoping to strike a life-saving spring. But the governments of Australia and Papua New Guinea refuse to budge in the face of international outcry; the center’s shutdown has been in the works for almost a year, and the plan has faced staunch opposition since its inception. The PNG immigration ministry doubled down Sunday by reiterating that the facility will remain closed, will not receive utilities, and that all who remain there must leave, though the question of restoring services will reportedly be taken up again by a PNG court this week.

Australia’s offshore detention centers have for years been at the center of gross allegations of abuse such as rape, child abuse, and psychological and physical assault. Reports of suicide within the compounds are also not uncommon. In August 2016, the Guardian published a trove of thousands of leaked documents detailing abuses at another facility on the island of Nauru, more than half of them involving children, drawing new scrutiny to the offshore sites. In June of this year, the Australian government reached a $52.7 million settlement in a class action lawsuit brought by 1,905 asylum seekers claiming they were abused on Manus.

Here’s what you need to know about the current crisis:

What is the Manus Island detention center?

The Manus Regional Processing Center at Lombrum Naval Base is an offshore detention complex formerly administered by private contractors, housing more than 600 men from countries including Afghanistan, Iran, Sri Lanka, Sudan and western Myanmar, among others. The detainees were asylum seekers intercepted while trying to reach Australia by boat. They then were transferred to the center where they waited for their asylum or resettlement claims to be processed, a lengthy ordeal that could sometimes take years. Australia, with one of the strictest immigration policies of any developed country, opened the offshore detention centers on Manus, Nauru and Christmas Island in the early 2000s as part of efforts to deter future arrivals. Controversial from the outset, the Manus facility was closed in 2008, but reopened four years later amid a surge in boat arrivals.

Why was it closed?

The PNG Supreme Court ruled the Manus complex unconstitutional in April 2016, determining that confinement in the facility violated asylum-seekers’ right to personal liberty. PNG Prime Minister Peter O’Neill then asked the government of Australia to make “alternative arrangements” for those residing there. Australia’s Immigration Minister Peter Dutton at the time rejected the ruling, saying that Canberra had no part in the legal procedures and would not allow the refugees to enter Australia, but later agreed to a joint relocation plan. On Oct. 31, PNG’s Ministry of Immigration and Border Control officially decommissioned the center with assent from the Australian government; food deliveries stopped, lights went out and sewage collection ground to a halt. The relocation sites, according to Reuters, were meant as a stop-gap measure in the wake of the mandatory closure that would keep the men on Manus while they await vetting by the U.S., which has agreed to accept some refugees that tried to reach Australian shores.

So why won’t they leave?

The proposed relocation site has been heavily criticized. The Australian government planned to transfer the refugees to “transit centers” in the island’s principal city of Lorengau. But many fear for their safety if forced to leave the encampment. Conflict between the local PNG community and refugees is not uncommon; the marginalized outsiders have been left to dwell far longer than authorities originally intended, and reports of attacks and robbery by locals have become commonplace. Moreover, U.N. officials have said that the new sites are “not ready” for inhabitants, claiming they are still under construction and are not designed to accommodate so many people. Refugees are also fearful of an uncertain future if they move; about 440 of the men at the facility have already been granted refugee status and await resettlement to a third country, the rest fear deportation back to their countries of origin, where they may face persecution.

What has happened at Manus since the closure?

The UNHCR warned early on of a “looming humanitarian emergency” if basic services were cut off, and that appears to be what is taking place. Toilets are not working, there is no power, medical care has been denied and food and water supplies began dwindling last week. Reports say sickness is spreading, as is anxiety over an attack on the facility by locals frustrated by the standoff and eager for their departure. Human Rights Watch told the BBC on Monday that some of the asylum seekers “have acute medical needs that are not being met,” adding that the situation “continues to be dire with little food and water.” An advocacy group called Asylum Seekers Resource Centre has reportedly been trying to assist urgent medical needs, but the needs are outpacing response capacity.

The next steps are unclear. Australian authorities are sticking to their line that the asylum seekers must move, either to relocation sites in the PNG community, or back to their countries of origin. Immigration Minister Peter Dutton said in August that “no one from Manus Island Regional Processing Centre will ever be settled in Australia,” and that continues to be the government’s position. Dutton last week accused those refusing to leave the facility of “trying to force a change to that policy,” adding that, “they will not.” Prime Minister Malcolm Turnbull on Sunday rejected an offer by New Zealand Prime Minister Jacinda Adern to resettle some of the asylum seekers, opting instead to pursue a previous agreement with the U.S., according to the BBC. That deal appears unchanged, if perhaps slowed, despite President Donald Trump’s vow to backtrack on the agreement that he called “the worst deal ever.” The Guardian reports that some 54 refugees had been vetted under the agreement as of September this year, and they are believed to have already arrived in the U.S. Regardless of long-term resettlement options, rights advocates warn that the standoff is reaching a critical point and requires urgent attention to avoid sickness and conflict. 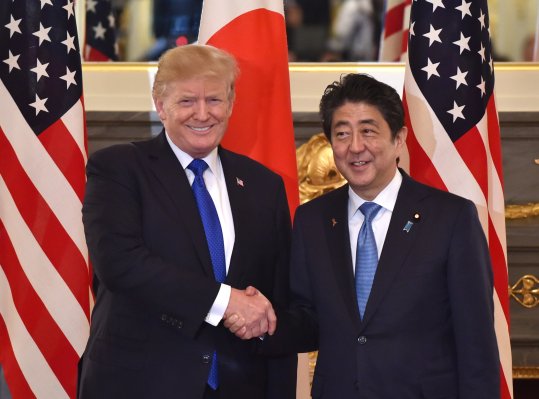 Trump Says North Korea is a Threat to the World
Next Up: Editor's Pick