As news of the incident began to spread, Groban — who was in the area — took to Twitter to share his personal experience and post live updates.

“Oh my god I just heard gun shots and ran with my dog. Downtown. F—,” Groban first tweeted after the incident occurred. About 20 minutes later he revealed that he was about half a block away from the scene and “heard 8-10 quick rounds fired off.”

Not long after, Groban explained how he could have been directly in the path of the attack were it not for his dog.

“I’m shaking. That’s the corner I was supposed to have my coffee but my dog pulled me into the park half a block away 10 min before shooting,” Groban tweeted.

The 36-year-old later tweeted a video of New York Police and Fire Department responders racing to the scene, where a suspect deliberately drove a truck onto a crowded bike path along Manhattan’s West Side Highway.

“Devastated for the victims and their families tonight & inspired by the spirit of this city. Sirens and trick or treaters everywhere,” Groban wrote a couple hours later. 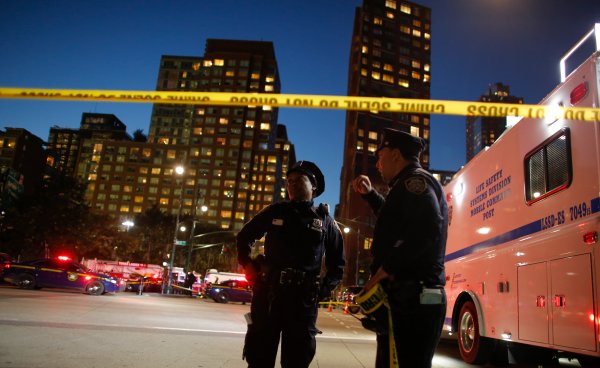 These Are the Victims of the New York City Truck Attack
Next Up: Editor's Pick