'Oh God. Not This Again.' Lower Manhattan Reacts to Another Terror Attack

Less than half a hour after an armed man drove a Home Depot truck down a bike path three blocks from the World Trade Center site in lower Manhattan, killing at least eight people and injuring more than a dozen, the scene on the street was surreal.

It was just after 4 p.m. on Halloween and a handful of nearby schools and day cares were letting kids out for the day.

Children, some as young as two and three, dressed as princesses and Wonder Woman and skeletons, were being tugged along by their parents through crowds of police officers and ambulances and bomb-sniffing dogs.

A father, pushing a pint-sized fireman in a stroller, debated whether to duck under police tape to get to a subway. A New York Fire Department Hazardous Material Tactical Unit vehicle — a “Haz Tac” van— blocked the path of a Michaela Jones and her two-year-old daughter who was dressed as Cinderella in layers of iridescent polyester.

“I got out of the subway and heard the sirens and thought, oh God. Oh God. Not this again,” said Jones, 28, who was a teenager and lived in Queens on September 11, 2001. She picks up her daughter every day before 5 o’clock at a daycare just a stone’s throw from the 9/11 Memorial site.

Stuyvesant High School, which borders the bike path where the attack occurred, was put on lockdown in the immediate aftermath. The playing fields at Asphalt Green, a community sports center that’s usually bustling with soccer games, was empty too.

Walter Wickiser, an art dealer who lives in an apartment in lower Manhattan, said the feeling was strangely familiar. He’d been here — actually right there, he said, pointing two blocks up — on September 11, when the Twin Towers dropped, he said.

“It’s a part of life for everyone in New York,” he said, referring to terrorist attacks. “It can happen to anyone and that’s an unfortunate fact of life.” His small, white bijou, Lily, squirmed in his arms.

Chaim Zaklos, a rabbi at Chabad of Battery Park City, who had been walking nearby, arrived at the scene of the attack just minutes afterward. “It was a chaotic scene,” he said. Police didn’t know if there was bomb in the Home Depot pick-up truck, or in the bushes nearby, so the police were screaming for everyone to get back, he said.

A man who’d been there showed cell phone pictures to Zaklos. There were bloody people, twisted bikes, victim flat on their backs. A woman showed me a shaky cell phone video of a man in a black shirt lying, contorted, on his stomach, pressed up against a stone planter.

Across Murray Street, maybe 50 feet away, a young man on a stretcher was being loaded into an ambulance, his black helmet balanced on his thighs. He smiled wanly at a crowd of journalists and passers-by.

Two blocks away, on the corner of Murray and Greenwich Street, Evangelos Samlidis, who immigrated from Greece and now runs a Halal food cart, said the city was already alive with rumors. His customers had told him they’d seen a Home Depot truck parked nearby that afternoon. They’d seen the perpetrator, who officials identified as Sayfullo Saipov, smoking on the steps of a nearby school. They’d heard the terrorist had snapped after getting into an altercation with a traffic cop.

“All I know that’s true is that this man is a criminal,” he said.

Outside the window of his food cart, a teenager dressed as a make-shift mummy, swaddled in toilet paper and masking tape, held Wonder Woman’s hand. 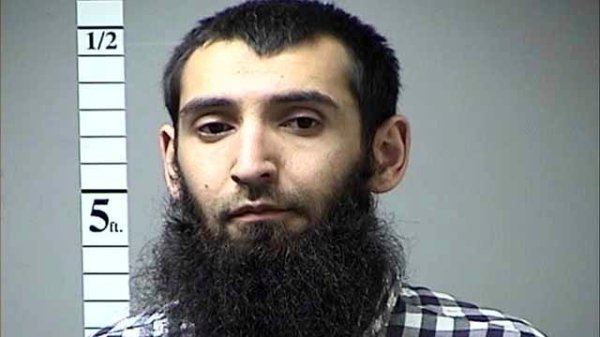 What to Know About NYC Terror Attack Suspect Sayfullo Saipov
Next Up: Editor's Pick