8 People Were Killed in New York's Deadliest Terror Attack Since 9/11. Here's What to Know

Law enforcement officials said Wednesday that the suspect, who they identified as Sayfullo Saipov, had been planning the attack for weeks, and committed the act in the name of ISIS.

The suspect — who exited his rented pickup truck with imitation firearms and was shot by police officers — has been taken into custody, police said.

An investigation into the attack is still ongoing. Here’s what we know so far:

At least eight people were killed and 12 others were seriously injured during the attack, officials said Wednesday, in what New York City Mayor Bill de Blasio earlier called “a very painful day in our city.”

Two adults and two children were injured when the suspect struck a school bus. A representative for the city’s Department of Education said the children were students in the New York City school system, and the adults were staffers contracted to work with the DOE through a bus company. They are among those who sustained injuries that are serious but not life-threatening.

The Argentine Foreign Ministry confirmed that five Argentinians were among the dead, according to a statement. One Belgian was also killed in the attack, Belgian foreign minister Didier Reynders told Belga news agency. Additional Belgian and Argentinian nationals were also among the wounded, according to the Associated Press. Two Americans, identified by the police as 32-year-old Darren Drake and 23-year-old Nicholas Cleves, were also killed in the attack.

Witnesses described a chaotic scene with victims lying on the ground beside twisted bicycles. Later, parents rushed to nearby schools to pick up their children, dressed in Halloween costumes.

“[New Yorkers] are resilient and won’t be deterred. Great to see large crowd at annual Halloween parade in Village. [Thanks] for showing the world who we are,” New York City Police Department Commissioner James O’Neill said on Twitter.

The suspect has been taken into custody

Police said the suspect — a 29-year-old man — struck pedestrians and cyclists on the bike path around 3 p.m. and continued driving a rented Home Depot pickup truck, colliding with a school bus.

The suspect then exited the vehicle holding a paintball gun and a pellet gun and shouted, “Allahu akbar,” the Associated Press reported, citing a law enforcement official. The phrase translates to “God is great” in Arabic.

The suspect has been identified as Sayfullo Saipov. Court records indicate Saipov had an address in Tampa, Fla. He is believed to have been living most recently in Patterson N.J., with his wife and three children. He rented the truck from a Home Depot in nearby Passaic, New Jersey.

Saipov was shot by law enforcement officers, taken into custody and transported to a local hospital, where he underwent surgery. He is now recovering from his injuries. Authorities have interviewed him, but declined to reveal anything beyond that.

Uber confirmed that Saipov was a driver on the platform and has been banned from the Uber app. A spokesperson for the company tells TIME: “We are horrified by this senseless act of violence. Our hearts are with the victims and their families. We have reached out to law enforcement to provide our full assistance.”

Officials called the attack an ‘act of terror’

“This was an act of terror — and a particularly cowardly act of terror aimed at innocent civilians,” de Blasio said. The White House has characterized Saipov as an “enemy combatant.”

New York Gov. Andrew Cuomo said there is no evidence of an ongoing threat at this time, and city officials urged New Yorkers to continue with their usual schedules.

The city’s annual Halloween parade began as scheduled at 7 p.m. on Tuesday. More law enforcement officers and heavy weapons teams were stationed along the route and at iconic locations throughout the city, police said.

The assault was very similar to incidents carried out in Europe by attackers who affiliated with the Islamic State; authorities said Saipov has followed ISIS’ instructions “to a T”

“We will be vigilant — more police everywhere,” Cuomo said at Tuesday’s press conference. “You’ll see them in the airports, you’ll see them in the tunnels. It’s not because there’s any evidence of an ongoing threat or any additional threat. It’s just out of vigilance and out of caution.”

The incident occurred on a popular bike path along the Hudson River near Stuyvesant High School in Lower Manhattan, a few blocks north of the World Trade Center.

“We have been tested before as a city very near to the site of today’s tragedy, and New Yorkers do not give in in the face of these kinds of actions,” de Blasio said. “We’ll respond as we always do. We will be undeterred.”

President Donald Trump condemned the attack in a series of tweets, emphasizing the threat of the Islamic State in the Middle East “and elsewhere” before offering his condolences.

Two and a half hours later, Trump tweeted again, pressing the need for “Extreme Vetting” by Homeland Security. The latest version of his administration’s travel ban, which prohibited entry from six Muslim-majority countries, expired Sept. 24, but is expected to be replaced by new restrictions.

This is a breaking news story and will be updated. 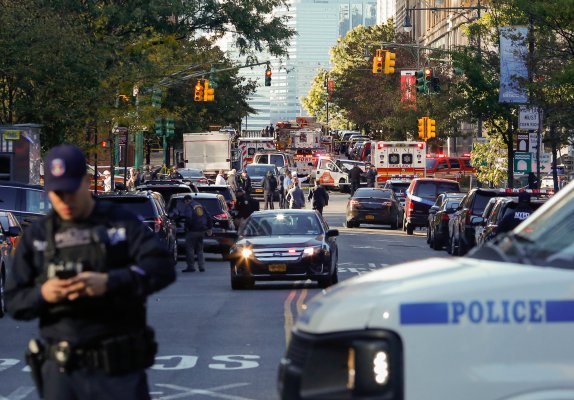