Eight people are dead and at least 11 injured after a man in a rented pickup truck drove down a popular bike path in Lower Manhattan Tuesday, hitting several pedestrians and a school bus before being shot by police, officials said. The incident is being treated as an act of terror.

“Based on the information we have at this moment, this was an act of terror. And a particularly cowardly act of terror,” New York City Mayor Bill de Blasio said in a press conference two hours after the attack. “We know that this action was intended to break our spirit.”

At 3:05 P.M, the 29-year-old suspect, who was identified as Sayfullo Saipov, according to the Associated Press, entered the West Side highway in a rented Home Depot pickup truck, and began striking pedestrians as he drove south down the road, NYPD Commissioner James P. O’Neil said at the press conference. The truck subsequently collided with a school bus near Chambers Street in Lower Manhattan, injuring two adults and two children, and the driver emerged from the vehicle with two guns, which authorities later identified as paintball and pellet guns. A law enforcement officer shot the suspect, and he was transported to a hospital after sustaining a gunshot wound.

As of Tuesday evening, none of the victims had been publicly identified. According Associated Press, the Argentine Foreign Minister confirmed that Argentinean citizens died, although a number was not provided.

Two students had been injured in the school bus collision, according to a spokeswoman with the New York City Department of Education, as well as two staffers working with the bus company contracted with the DOE.

Carmen Farina, Chancellor of the New York City School system, said that the department will be providing guidance and trauma counselors Wednesday in schools for those who needed them.

An investigation into the incident is underway, although New York Governor Andrew Cuomo said he believed the suspect acted alone and is not part of a wider plot. A law enforcement official told the Associated Press the suspect shouted “Allahu Akbar” as he exited the truck.

In the immediate aftermath of the incident the area surrounding Chambers Street was largely blocked off and heavily guarded by law enforcement, although parents who needed to pick their children up from school were allowed to enter the closed off vicinities. The incident ended right by Stuyvesant High School, one of the city’s most prestigious specialized schools. “This incident is over,” said O’Neill. “It did end right by Stuyvesant High School so we had to make sure all the kids were taken care of, and we held them in place for a while.”

A woman who was parked opposite Stuyvesant High on Chamber Street, waiting to pick up her children at nearby PS 89, heard the rented truck hit the school bus. The impact was on the passenger side, which was extensively damaged. “It was like aluminum foil.” She dialed 9-11.

The woman, who gave her name only as Ms. Lin, said the driver of the white rental stumbled out of the truck and fled across West Street.

He was challenged by a man clad entirely in gray, she said, and circled back across the street to elude him. The fleeing driver held his hands over his pockets, she said. “I thought it was a hit and run,” she said.

She said police were on the scene within seconds and she heard four shots.

Another mom who rushed to Stuyvesant to find her child told TIME she had witnesses the suspect crash into the school bus. “I saw there was a car crash into a school bus and then i saw a…man come out of his car circling around the west side highway and chambers, circling with the [paintball and pellet guns] in his hands.”

The White House said President Trump has been briefed on the incident by his Chief of Staff, General John Kelly, and will continue to be updated as more details are provided. The White House issued a statement from Trump a little after 7 P.M., offering the administration’s full support to the NYPD and FBI’s investigation and thanking the first responders.

But Trump had already taken to Twitter on three separate occasions before the statement was issued. Initially, he called the suspect “a very sick and deranged person.” “Law enforcement is following this closely. NOT IN THE U.S.A.!” he wrote. A little over an hour later, Trump followed up with another tweet, this time about the need to stop ISIS, even though no connection has been established between the attack and the terrorist group. “We must not allow ISIS to return, or enter, our country after defeating them in the Middle East and elsewhere. Enough!” he tweeted.

And, less than an hour later, Trump tweeted again, this time offering “thought, condolences and prayers” to the victims, writing that “God and your country are with you!”

With reporting by Karl Vick. 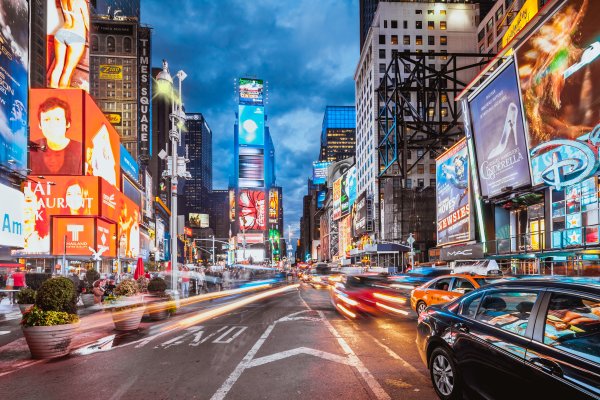