Following Morales’ return, the third episode of The Walking Dead‘s eighth season saw the lines between the “good” and “bad” guys become more blurred than ever. After attempting to reason with his former companion, Rick seemed conflicted over the kill-or-be-killed mindset of his group — perhaps foreshadowing the, “My mercy prevails over my wrath,” flash-forward from the premiere.

“Look at us, Rick. Look at us. We’re two a—holes who will do whatever we have to just to keep going and the only difference is I’m the one holding the gun,” Morales said. “That doesn’t make me any worse than you, Rick. That just makes me luckier. ‘Cause let’s face it. If it wasn’t me, if it was you holding the gun, I’d be brains out on the floor right now.”

It was then that Daryl snuck up from behind and shot Morales without a second thought, giving Rick even more cause for concern. “I know who it was,” Daryl told him. “That don’t matter. Not one little bit.”

And Daryl wasn’t done showing how little compassion he has for Negan’s followers. After Rick gave a lone survivor his word that he could take one of their cars and leave if he told them where the outpost’s guns had been taken, Daryl shot the Savior in the head after he gave his answer.

Several other characters were plagued with similar moral crises in “Monsters,” with the conflict between Morgan and Jesus coming to physical blows. “I’m not right. I know that, I’m not right,” Morgan said of his desire to kill the Saviors they took hostage. “But that doesn’t make me wrong.”

The episode also saw the death of Eric, who bled out after an emotional goodbye with Aaron.

The hour ended on a cliffhanger when Ezekiel’s celebration, in honor of taking an outpost without losing a single soldier, was cut short by a sniper who began firing on the group. 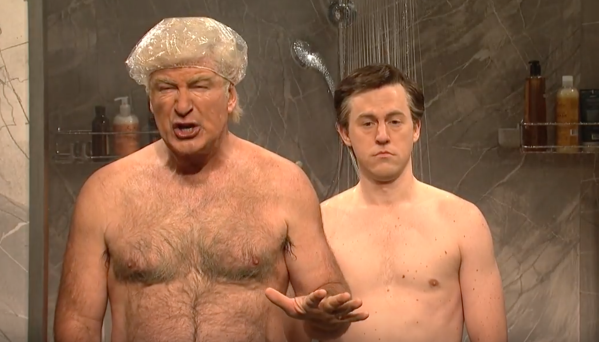 Alec Baldwin Takes Swipe at Harvey Weinstein on SNL
Next Up: Editor's Pick