What the U.S. Must Do to Save South Sudan, a Nation it Helped Create

Akki Adduok, a displaced woman residing in the Protection of Civilians (PoC) site in Malakal, South Sudan, sits in the spot where her shelter used to be on February 26, 2016.
ALBERT GONZALEZ FARRAN—AFP/Getty Images
Ideas
By Ciaran Donnelly

Recently, U.S. Ambassador to the United Nations, Nikki Haley, departed for her first ever trip to Africa, visiting Ethiopia, the seat of the African Union, and the Democratic Republic of the Congo and South Sudan, two of the continent’s most war-weary nations. Her visit to Juba in South Sudan will be the most consequential of the trip — both for U.S. foreign policy and for millions of South Sudanese civilians. Haley has been tasked with evaluating whether withdrawing U.S. aid would put pressure on the besieged country to end its four-year civil war.

Haley has observed that “without political will” from South Sudan, the “U.N. cannot achieve its goals.” But by adding that “our goal is to serve American interests, and to help give the tens of millions of citizens of the DRC and South Sudan the opportunity to return home, live in peace, and build a prosperous future,” she also illustrates the difficulty of her mission.

When the Republic of South Sudan became an independent country on July 9, 2011 — with the assistance of the U.S. — the people of South Sudan and of the world were hopeful. After nearly 30 years of civil war, perhaps stability would prevail and the new nation could thrive with the aid of income from natural resources previously controlled by its former government in Khartoum, Sudan. Barely two years later, South Sudan descended into one of the world’s most horrific political and ethnic conflicts. This was tipped off by President Salva Kiir and his former vice president Riek Machar, and characterized by routine violations of international law and sexual violence. The fighting has resulted in the deaths of more than 50,000 people, the flight of nearly 4 million refugees, including 1.87 million internally displaced persons and more than 6 million people needing humanitarian assistance. The U.S., as its largest donor, has funded more than $1.2 billion in emergency aid for civilians in fiscal year 2017.

Before her trip, Haley said that the “goodwill and generosity of the American people are well-known, and we will continue to help the most vulnerable. But we will not do that if our assistance is continuously blocked from reaching people in need,” indicating the Trump Administration had seriously considered cutting off funding to South Sudan. On Oct. 23, following meetings at the African Union headquarters in Addis Ababa, Haley told reporters, “When you look at South Sudan, you have to really think hard before you pull U.S. aid, because President Kiir doesn’t care if we pull U.S. aid. He doesn’t care if his people suffer, and that’s the concern we have.”

This is a conflicting position worth acknowledging. How does a U.N. member state discourage predatory and destructive political leadership without inflicting further suffering by discontinuing lifesaving aid?

The International Rescue Committee has worked in the region for 25 years, and during this most recent bloodshed, it has established emergency response teams to assist displaced people — including through teams who travel into dangerous, hard-to-reach zones and focus on those with special needs or impaired mobility. Humanitarian responders face serious barriers to access inside South Sudan, where warring sides continue to block, attack or kill aid workers. Restrictive policies, such as taxes (official and unofficial) that increase costs for work permits and actions on humanitarian access, are on the rise; access to certain areas is outright denied.

But through our staff on the ground — almost all of whom are South Sudanese themselves — we also see the hopes and potential of the people of South Sudan. We see beyond their suffering and understand that while humanitarian assistance can be the difference between life and death today, they yearn to play an active role in rescuing their country from catastrophe. When confronted with the people who face starvation, disease and certain death, there is always a third way.

A re-evaluation of the U.S’ political strategy in South Sudan is welcomed, but we mustn’t give up on the people of South Sudan. Rather than pull out humanitarian aid — which would punish not the government but the civilians of South Sudan — Ambassador Haley must use her visit and U.S. diplomatic muscle to tease out that political solution. Through the peace initiative known as the High Level Revitalization Forum (HLRF), the U.S. has a real, but time-limited opportunity to work with regional governments to achieve a permanent ceasefire, implement the Agreement on the Resolution of the Conflict in the Republic of South Sudan (ARCSS) signed in 2o15, and revise the plan for elections to be held in 2018. Ambassador Haley can effectively use her time in South Sudan to keep the spotlight on the HLRF, as well as signal to its neighboring countries that while the U.S. stands ready to support their efforts, it will not accept an open-ended process.

The last time I was in South Sudan, I was struck by the rising sense of hopelessness among the people there, after witnessing years of inspiring optimism and patience. It seems Ambassador Haley sensed something similar. At a refugee camp in Ethiopia, she asked, “How can the international community allow this to go on? At some point, President Kiir needs to be held accountable for all of the tragedy that he’s caused these people.”

In order to keep these people alive and to positively change the statistics next to the faces, the U.S. must look past Kiir and focus — alongside partners from across the humanitarian community — on alleviating the suffering of the South Sudanese, while working toward a political resolution. We can hope for a regional solution to a regional problem, but the truth is that U.S. aid and diplomacy — both its carrots and its sticks – remain critical catalysts. Otherwise, Haley’s inspiring trip will be for naught, and she will have not only let down the people of a country the U.S. helped conceive, but also those of us working so hard to keep it alive. 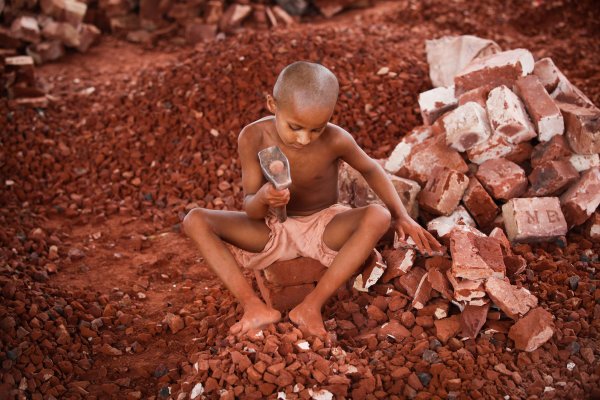 Modern Slavery Is Real and 40 Million People Are Trapped In It
Next Up: Editor's Pick