A week ago, on October 25, Donald Trump’s former foreign policy advisor, George Papadopolous, appears to have posted a photo of himself on Twitter wearing a suit and standing the streets of London with the caption: “#business.”

There are two things that are weird about that post.

First, we now know that less than three weeks before he posted that happy-go-lucky pic of himself, he pleaded guilty to lying to federal agents in an investigation into Russian involvement in the 2016 election and become what called a “proactive cooperator” in the ongoing case.

Thanks to the great deductive powers of internet sleuths like Aric Toler and Alex Billig, we have pretty good reason to believe that the photo was actually taken sometime before May 2015.

One major giveaway is that all the stuff in the background of the photo has changed in the intervening years. A close analysis of Google Street View, which provides time-stamped images of popular street scenes, indicates, for example, that the stickers on a light pole behind Papadopoulos in the photo were removed sometime between July 2014 and May 2015. So if he was standing in front of those stickers on that pole, it definitely wasn’t in October 2017.

Another red flag is that if you do a reverse Google Image Search of the photograph, it pops up in a Romanian news article from September 30, 2016.

We don’t know why Papadopoulos posted the old picture. Maybe he wanted to present a positive image to everyone who he knew was going to be looking him up online. If that’s the case, it worked. With his name making headlines, this old picture is all over the news. 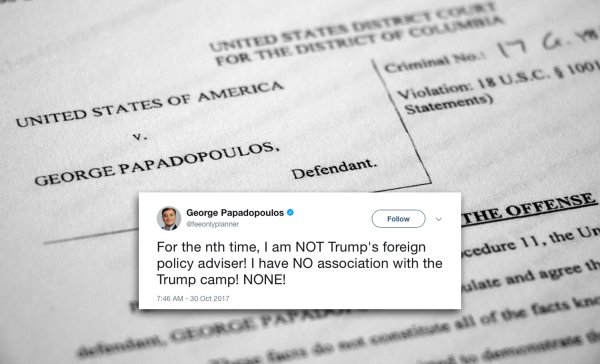 The Short, Happy Political Career of George Papadopoulos
Next Up: Editor's Pick