Republicans on Capitol Hill dodged questions on Monday about special counsel Robert Mueller’s investigation into Russian interference in the 2016 presidential election, even after the sweeping probe resulted in charges against former Trump campaign chairman Paul Manafort and his business associate earlier in the day.

The indictment disclosed on Monday charged Manafort and his business partner Rick Gates with conspiracy against the U.S., money laundering, failing to register as a foreign agent and other crimes related to their political work in Ukraine and the millions of dollars they received for it. Manafort and Gates pleaded not guilty.

Separately, it was revealed on Monday that former Trump foreign policy advisor George Papadopoulos had pleaded guilty to lying about his contacts with foreign officials linked to the Russian government.

The silence from the Republican conference has led some congressional Democrats to worry that GOP officials won’t hold Trump accountable if the President steps in to interfere in the Mueller investigation. (The White House said on Monday that Trump has “no intention or plan” of firing Mueller.)

“I’ve been worried about [Mueller losing his job] since Rod Rosenstein [the Deputy Attorney General who appointed Mueller] appeared before my committee,” Sen. Kamala Harris, a California Democrat, said on Monday. “And I feel very strongly, as I said many months ago, that it’s critical that the Department of Justice give Bob Mueller full authority over that investigation. If there’s a bipartisan bill to protect him, absolutely I support that.”

Harris was alluding to two bipartisan bills in Congress that would protect Mueller from termination. One, sponsored by Republican Senator Lindsey Graham of South Carolina and Democratic Senator Cory Booker of New Jersey, would require a judge to sign off on any attempt to fire him. Another bipartisan proposal, by Republican Senator Thom Tillis of North Carolina and Delaware Democrat Chris Coons, would give any special counsel an avenue to challenge his or her dismissal in court.

But on Monday, Graham told reporters that passing his own bill wasn’t a present priority.

“I don’t feel an urgent need to pass that law until you show me a reason that Mr. Mueller’s in jeopardy,” Graham told reporters. “I don’t think anyone in their right mind at the White House would think about replacing Mr. Mueller.”

Tillis agreed that passing the legislation was not imminent.

“We’re talking with the other sponsors and seeing if it’s the sort of thing that can get support,” he told TIME, before dismissing the notion that Trump could interfere in the Mueller investigation. “I want to make it clear that it isn’t just about this special counsel. It’s about all future special counsels.”

Other Republicans were more evasive. A press conference held by nine Senate Republicans on the judicial nomination of the conservative Catholic law professor Amy Coney Barrett collapsed when reporters began calling out questions about the Manafort indictment despite Senate Majority Whip John Cornyn’s insistence that he only wanted questions on the topic at hand. Mitch McConnell, the Senate Majority Leader, had slipped out a side door before questions began. When they did, GOP Senator Chuck Grassley—who chairs the Judiciary Committee, which is probing Russian interference—turned and walked out the door behind him, nearly knocking over the American flags nearby in the process.

Sen. James Lankford, an Oklahoma Republican who was among the nine senators at the press conference, spoke to reporters afterward, and dismissed concerns that Monday’s indictments could prompt retaliation from the White House.

“There’s no been real risk to the Mueller probe,” Lankford said. “People have said that the president could at any moment step in because early on he made some innuendos and tweets, but there’s been no evidence that he’s even leaning in that direction.”

Meanwhile, Democrats were calling for action. “This is a pretty sobering moment in American history. It is the end of the beginning but not the beginning of the end,” said Sen. Richard Blumenthal, who sits on the Senate Judiciary Committee. “In my view, Congress should assure that Bob Mueller has no worries about his job. It’s our responsibility to ensure his independence.”

A number of Republicans were simply annoyed that the drama of the day was distracting the public from tax reform, a longtime G.O.P. pet project. The House Ways and Means Committee is set to release a tax overhaul bill on Wednesday. In an interview with a Wisconsin radio station on Monday, Ryan said he hadn’t read the indictments.

“I really don’t have anything to add other than nothing’s going to derail what we’re doing in Congress,” Ryan said. 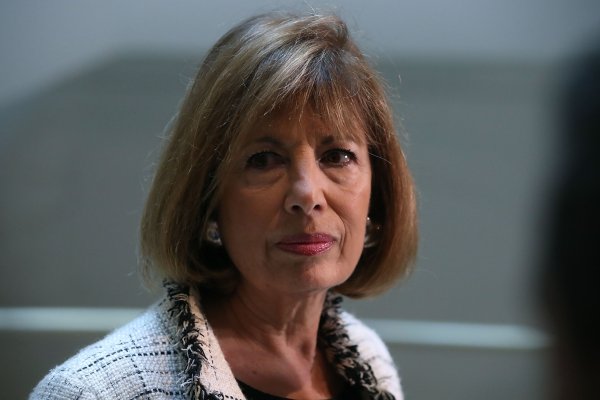 This Congresswoman Wants Women on Capitol Hill to Say #MeToo
Next Up: Editor's Pick