Paul Manafort Was Just Indicted For Conspiracy Against the United States. What's That?

The Office of the Special Counsel indicted Donald Trump’s former campaign manager Paul Manafort and his longtime business associate Rick Gates on 12 counts. The first was “conspiracy against the United States.”

But what exactly does that mean? While it’s a common term circulated in the legal profession, it’s less well known to the general public.

The description may sound a bit alarming, but the count is fairly common in federal cases, legal experts say.

“This is not novel by any stretch,” says Bill Mateja, who worked in Department of Justice as a prosecutor during the George W. Bush administration and now works in white collar defense law at the law firm Polsinelli. “I will tell you almost every notable big federal case has got a conspiracy count.”

(In 1996, for instance, when three of Bill Clinton’s associates were convicted in the Whitewater Investigation, the charges included conspiracy).

The indictment explains that Manafort and Gates, over the past 11 years “knowingly and intentionally conspired to defraud the United States by impeding, impairing, obstructing and defeating the lawful governmental functions of a government agency, namely the Department of Justice and the Department of the Treasury.”

In short, says Mateja, this means that Manafort and Gates simply agreed to take illegal action. In this case, the illegal action Manafort and Gates are alleged to have taken, according to the indictment, includes failing to report their foreign bank account reports, failing to register as foreign agents and providing false statements about their lobbying work with Ukrainian government over the course of 11 years.

But bringing a charge of conspiracy also enables prosecutors to bring in evidence for the trial who can speak about these actions Manafort and Gates engaged in, which can include interviews with anyone from former assistants to bankers who may have handled these offshore accounts.

“Everything that relates to them agreeing with one another to violate these statutes can come into evidence,” Mateja said.

Since the time frame in the indictment ranges from 2006 to 2016, that means it technically includes Manafort’s time as chairman of the Trump campaign.

Manafort and Gates are expected to appear in court Monday afternoon for their first hearing, after surrendering themselves to authorities this morning. Typically, the sentence for conspiracy against the United States is dependent upon the charges relating to that conspiracy; in this case thats failing to report their overseas bank accounts and failing to register as foreign agents.

The civil penalty for willing failing to report a foreign bank account, for instance, can be a fine as high as $100,000. A criminal penalty can result in a maximum fine of $250,000 and/or five years in prison. 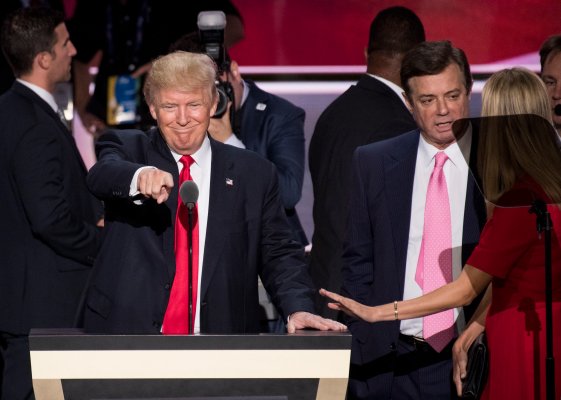 President Trump Responds to Paul Manafort Indictment on Twitter
Next Up: Editor's Pick