Why Did Catalonia Just Vote for Independence From Spain? Here's What to Know

The ongoing standoff between the Spanish region of Catalonia and Spain’s central government in Madrid escalated Friday when the Catalonian parliament voted to declare the region an independent republic.

“We constitute the Catalan Republic, as an independent and sovereign country, under the rule of law,” read a motion that passed 70-10, fueling the biggest political crisis to hit Spain since the 1970s.

Catalonia’s move defies Spanish Prime Minister Mariano Rajoy, who’s been working to quash the succession effort and keep Spain intact. Just minutes after Catalonian lawmakers voted on Friday’s resolution, Spain’s senate granted the central government powers to impose direct rule on the region, setting up what is likely to be a raucous few days in Barcelona and elsewhere.

Friday’s vote was greeted with cheers by supporters of the independence movement, many of whom view have economic grievances about Madrid’s tax policies and view their region as culturally distinct from the rest of Spain. But some anti-independence lawmakers boycotted the vote — one warned his colleagues that “you will go down in history for having fractured Catalonia and for sinking the institutions of Catalonia” The New York Times reports.

Here’s what to know about Catalonia’s independence vote.

Where is Catalonia, Spain on the map?

Where is Catalonia, Spain on the map?
Google Maps

Why is Catalonia seeking independence?

Catalonia, which is Spain’s richest region, has a distinct cultural heritage and language. The push for independence crystallized during the fallout of the global financial crisis in 2008. Some Catalans believe the country’s rising unemployment levels and languishing economy was pulling the region down, and they began to seek greater autonomy from Madrid.

What led up to Catalonia’s independence vote?

Friday’s vote came after weeks of brinksmanship between Catalonia President Carles Puigdemont and Spanish Prime Minister Mariano Rajoy. The situation first escalated on Oct. 1, when nearly 90% of Catalonian voters backed independence from Spain in a controversial and disputed referendum. Catalonia officials say turnout was about 43%, despite the vote being suspended by Spain’s highest court and deemed illegal by the federal government in Madrid.

The Catalonia independence referendum led to weeks of political maneuvering and mixed messages on all sides. During an Oct. 10 speech, Puigdemont stopped just short of declaring independence, opting instead to pursue a dialogue with Madrid. But Rajoy has maintained a hard line throughout, announcing Oct. 21 that he was invoking a constitutional rule allowing him to “restore the rule of law, coexistence and the economic recovery and to ensure that elections could be held in normal circumstances.”

Puigdemont appeared to take a step towards détente on Thursday, when he held off from declaring independence and suggested early elections instead. But the attempt fell apart in the face of his own hardcore supporters and opposition from Madrid, the Financial Times reports. Puigdemont then turned the matter to Catalonian parliament, which on Friday voted to declare independence.

Will Catalonia become independent of Spain?

What happens next is unclear. But Catalonia will face significant challenges attempting to assert its independence in the face of Spain’s decision to impose direct rule on the region. It will get little help from abroad, as other European nations, many of which are facing separatist movements of their own, have shown little indication that they will acknowledge Catalonian independence. Scotland’s First Minister Nicola Sturgoen, who has been seeking a new vote for independence from the U.K., says Catalonia has the right to self-determinate.

The European Union, meanwhile, has distanced itself from the crisis, deeming it an internal Spanish issue. “For E.U. nothing changes. Spain remains our only interlocutor. I hope the Spanish government favors force of argument, not argument of force,” European Council President Donald Tusk tweeted on Friday.

Correction: The original version of this story misstated Nicola Sturgeon’s position on Catalan independence. She believes Catalonia has the right to determine its future; she has not refused to recognize the independence declaration. 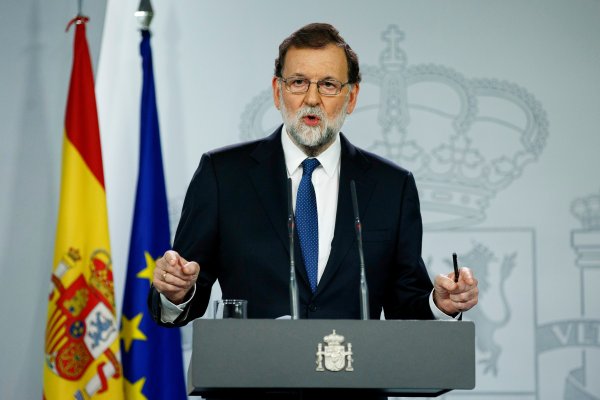 Spain Set to Impose Direct Rule on Catalonia
Next Up: Editor's Pick