By Tessa Berenson
Carson says, "success is not how many people we get into public housing, but how many we get out."
Stephen Voss for TIME

With three daughters and an old house full of flaking paint, Michele Stewart and her husband couldn’t afford to protect their children from lead poisoning. But then help arrived in the form of a $19,433 grant from the federal government for new windows, doors and trim. It was followed, one sunny June morning, by a visit from the nation’s most famous former brain surgeon, who arrived at Stewart’s Baltimore house with reporters in tow. “It was my house, but now it’s my home,” Stewart, a dental-hygienist student, told the assembled crowd.

Ben Carson, Secretary of the Department of Housing and Urban Development (HUD), had come to trumpet the roughly $100 million his agency sets aside each year to remove toxic lead-based paints (outlawed in U.S. construction since 1978) from the homes of lower-income residents who can’t afford to do so themselves. The spending is worthy, he assured the reporters. As a pediatric neurosurgeon, Carson often felt frustrated when he released his patients from the hospital knowing they would return to homes that could make them sick. “I spent a lot of time working extremely hard [operating] on children from Baltimore,” said Carson, who spent the bulk of his career at Johns Hopkins Hospital. “Then you get them well again and you send them into an environment that isn’t healthy … This is an opportunity to close the loop.”

Standing at the entrance to Stewart’s home, hand placed thoughtfully on his chin as he queried Baltimore housing professionals about lead remediation, Carson said the government was there to help. “In an ideal world where we had a lot of money,” he said, gesturing to the other houses on the street, “we would just remediate all these homes.”

This was not the sort of thing that Carson would have said during his rise as a Republican presidential candidate in the 2016 primaries. Back then, he was a conservative warrior selling a free-market vision of hard work, small government and personal responsibility. He once cast federal spending as a form of oppression, calling Obamacare the “worst thing that has happened in this nation since slavery.” He compared the government to a morbidly obese man so addicted to eating that he could no longer leave the house. A government that takes care of all your needs, he said, is “the opposite of compassion.”

Carson’s inconsistency may seem like political convenience. But it also reflects an old American debate: How can the government help people in need by propping them up without becoming a crutch? Nowhere is that tension more stark than at HUD. A lot of people need help to avoid homelessness and begin climbing out of poverty. The roughly 18 million families for whom housing costs eat up more than 50% of their income can face a brutal choice: pay for groceries, medicine or clothes for their kids or risk losing the roof over their heads. HUD spends 84% of its $47 billion budget simply helping low-income people pay rent. But the real goal of the agency, Carson argues, has to be for people to no longer need its help at all.

Now it’s his job to figure out how to square that circle. Unfortunately for Carson, his task has been complicated by the Trump Administration’s proposed $6 billion, or 13%, cut in HUD’s budget next fiscal year. As many as 250,000 people could lose housing subsidies in the unlikely event the cuts go through, according to the National Low Income Housing Coalition, putting them at risk of homelessness. The cuts are particularly controversial since 65% of people who benefit from HUD money are minorities. There would be “a disproportionate impact on people of color,” says Jocelyn Fontaine, a senior research associate at the Urban Institute. Congressional proposals are less dire: the House approved a budget that shaves $487 million from the agency, while the Senate’s plan is more generous.

Carson says he wants to reconcile the competing challenges of need vs. dependency by devising programs that teach self-sufficiency. “For me, success is not how many people we get into public housing, but how many we get out,” he told TIME at a Baltimore elementary school that June day. “How many people do we give the life skills that will allow them to be independent?” The question is whether a leader with no experience in government or housing can construct policies that deliver on that promise.

Carson’s life story—which has been canonized in children’s books, memorialized in the National Museum of African American History and Culture and retold in a TV movie staring Cuba Gooding Jr.—is a testament to his twin pillars of education and faith. He grew up poor in Detroit to a single mother with a third-grade education, though he never lived in public housing. As a child he struggled with a violent temper, but a religious experience in high school quelled his anger, he says, and set him on a smoother path. He earned spots at Yale and the University of Michigan Medical School, and became the youngest chief of pediatric neurosurgery at Johns Hopkins, at age 33.

Carson credits his mother for teaching him to reject government assistance, “although she occasionally did accept some public aid,” Carson wrote in his 2015 book, A More Perfect Union. “She did not think that receiving public assistance was a good thing, and she constantly drilled into both my brother and me the need to work hard and to become self-sufficient citizens.”

It was that industriousness and a flash in the political zeitgeist that launched Carson’s political career. In 2013, at the National Prayer Breakfast, he stood by President Obama and slammed his health care law, instantly becoming a conservative darling. Pushed by grassroots support, he decided to run for President. After a brief stint atop the early GOP primary polls, he dropped out of the race in March 2016, endorsed Donald Trump one week later and swore he would return to the private sector.

So when Trump announced his plan to nominate the former surgeon for HUD Secretary, experts in the field scratched their heads. For all his talk of the evils of welfare, the actual mechanics of housing policy have never been one of Carson’s passions, let alone an area of expertise. Carson wants to help people, says a former HUD Secretary who asked not to be named, “but he doesn’t seem to understand the central importance of housing in that opportunity.” Even his friends admit that it will take time for Carson to adapt. “He was a revolutionary scientist,” says Armstrong Williams, a close adviser. “But in [government], it requires patience.”

It’s been a bumpy adjustment. When Carson went on a listening tour to meet with people in communities benefiting from HUD programs, the most publicity he drew was when he got stuck in an elevator in Miami. He also received bad press for saying that public housing shouldn’t be too “comfortable” and that poverty was to a large extent “a state of mind.”

Carson argues there is a middle ground between the dire warnings of housing advocates and what he sees as the damaging status quo of federal subsidization of low-income Americans. Federal housing, he says, should be a way station between dependency and independence. In 2015, according to HUD, the average length of stay in assisted housing was six years, up from 3.5 years in 1995. “When I talk about getting government out of people’s lives, I’m talking about getting government out of every aspect of their lives,” Carson says. “I see myself as trying to design policies and programs that develop our human capital, that move people along.”

But with the vast majority of HUD’s budget going to renewing existing rental assistance, it’s not that easy. For starters, 57% of households receiving federal rental subsidies are headed by someone who is elderly or disabled, according to HUD. It’s harder for them to find a job. Helping the rest presents its own challenges. “A family or an individual cannot think about bettering themselves if they have unstable housing,” says Stephen Glaude, a HUD deputy undersecretary to President George H.W. Bush. “If they’re worried about where they’re going to live, they can’t think about career, they can’t think about education, they can’t think about upward mobility.”

Even without cuts, Carson has inherited a diminished agency. As rents rise, more families need help, and each HUD dollar does a little less. About 5 million households received rental assistance in 2016, according to the Center on Budget and Policy Priorities, but at least three times as many more qualify and don’t receive the help. Explains Barbara Sard, vice president for housing policy at CBPP: “There’s no way out of this box except more money.”

Carson’s overall message is largely in sync with the traditional conservative approach to HUD: limit federal regulations on housing. Community development block grants, which are some of the most flexible ones that HUD allocates, were created under a Republican President in the 1970s. (Trump wants to cut them.) Still, agency veterans say Carson has to devise credible programs that will accomplish his goals of weaning people off government aid. “If the reform agenda of Secretary Carson is going to rely on people having faith and doing more for themselves, that’s fine,” says Glaude, but “it cannot be the only conversation.”

Carson wants to grow the Moving to Work program, which lets state and local housing agencies test new policies, including experimenting with work requirements. Much of the answer to the agency’s challenges, he says, lies in the private sector. He’s looking at expanding the low-income-housing tax credit, which provides tax breaks to build affordable housing, and making it easier for public housing developments to use private money for property improvements. “I want to move us from a mind-set, not only at HUD but across the nation,” Carson says, “of government riding in on a white horse with a bucket of money.”

But in Baltimore he was the man on the white horse, moving from Stewart’s home to Linda Herndon’s, a brick house from which the lead paint had been removed, thanks to $13,800 from HUD. There was evidence of Herndon’s grandniece throughout the home: a bedroom decorated with Frozen accessories, a drawing of Wonder Woman on the family-room mantel. Carson looked slightly out of place in his suit and red tie: a government official surrounded by camera crews on the back patio as neighbors peered curiously over low fences. But then he got an idea, maybe spurred by his campaign’s grassroots ethos. Had Herndon’s use of the grant, he asked, prompted any of her neighbors to apply for it too? “Actually, I started promoting the lead program!” Herndon declared. “I said, ‘Y’all, that program is awesome.'”

Carson smiled. Debates about the perils of federal aid could wait. This was the kind of pro-government initiative he was learning to like. 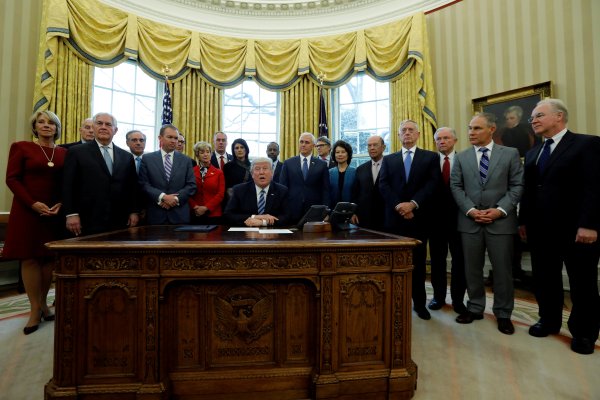 How Trump's Cabinet Is Dismantling Government as We Know It
Next Up: Editor's Pick