One Simple Way to Make a New Healthy Habit Stick

Want a make a new healthy habit stick? Do it when you first wake up, a new study recommends.

The small study, published in the journal Health Psychology, found that people who committed to stretching every morning picked up the routine more quickly than those who stretched every evening. Researchers say the stress hormone cortisol — which tends to be highest first thing in the morning — may be the reason why.

Scientists know that stress hormones play a role in learning and memory, particularly around the formation of habits; previous research has shown that when cortisol levels are manipulated — via cortisol injections or exposure to stressful situations — people seem to learn new behaviors more quickly than they would otherwise.

This study, however, suggests that the natural ups and downs of cortisol may also affect how successfully people adopt a new behavior. Researchers followed 48 university students for 90 days, during which the students tried to adopt a new stretching routine recommended for flexibility and to prevent back pain.

Half of the people were told to do a 15-second hip-flexor stretch every morning after they woke up, and half were told to do it every night before bed. Every day, when prompted by a smartphone app, the students answered questions about whether they’d done the stretch and how much they had to think about it before doing so. They also provided saliva samples every month, which were tested for cortisol levels.

Both groups got better at remembering to do their stretches over time. But the researchers found that people in the morning group were on track to automatically remember to do the stretches every day sooner than those in the evening group. Based on the researchers’ projections, the morning group would automatically remember to stretch on the 105th day, while the evening group would take until the 154th day.

There could be several reasons why habits are easier to form in the mornings, the authors note. “It is possible that the behavior was perceived as less difficult, more satisfying, or more easily cued in the morning than in the evening,” they wrote in their paper.

But people’s cortisol levels also tended to be highest in the morning, and the researchers suspect that may be a big part of the explanation. Their findings backed up their theory: Once they adjusted for individual variations in cortisol levels, the gap between the morning and evening groups disappeared.

Lead author Marion Fournier, a lecturer at the Université Nice Sophia Antipolis in France, says that the study results may not apply to everyone. While cortisol is generally highest in the morning, specific patterns vary from person to person — and also depend on the environment they’re in and their ability to cope with stress. The people in the study were also all healthy, normal-weight nonsmokers who weren’t using hormonal contraception, since excess weight, smoking and hormonal birth control can all affect cortisol levels.

The extent to which these findings can be translated to other real-life scenarios — and more complex behaviors — should be investigated further, Fournier says. “We asked participants to repeat an easy and quick behavior, which is not the same as a more complex behavior like exercising, for example,” she wrote in an email to TIME.

But still, she recommends that people try to adopt healthy habits in the morning rather than in the evening. And the most important thing, she says, is to repeat the behavior in the same context every day. “If you decide to start your day with a glass of water, use a cue — a note on the kitchen table you’ll see when you wake up, for example — to remind you at the beginning,” she says. “After a while, the cue won’t be necessary.”

Fournier says the research has inspired her to try adopting her own healthy morning habit. “I put a note in the mirror in my bathroom to stretch every morning after brushing my teeth,” she says. “It worked — until I left for vacation.” 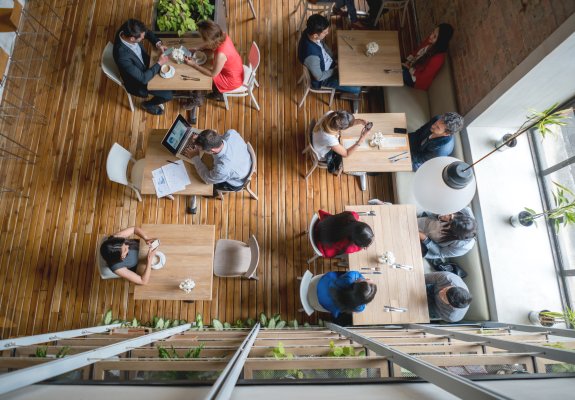 Why Eating Alone May Be Bad for You
Next Up: Editor's Pick