Five hundred years ago, on Oct. 31, 1517, the small-town monk Martin Luther marched up to the castle church in Wittenberg and nailed his 95 Theses to the door, thus lighting the flame of the Reformation — the split between the Catholic and Protestant churches. Luther’s act is taught as one of the cornerstones of world history, and remains a lasting symbol of resistance five centuries later.

But that’s not actually what happened — or at least that’s the argument of some historians, even as the Protestant world celebrates the anniversary.

“The drama of Luther walking through Wittenberg with his hammer and his nails is very, very unlikely to have happened,” says Professor Andrew Pettegree, an expert on the Reformation from the University of St. Andrews, Scotland. “The castle church door was the normal noticeboard of the university. This was not an act of defiance on Luther’s part, it was simply what you did to make a formal publication. It would probably have been pasted to the door rather than nailed up.”

Peter Marshall would go even further. A historian of the Reformation at Warwick University, England, he believes there’s a strong case to be made that the Theses were never posted at all, and that the story was invented to suit the political needs of people who came later. “The incident was first recorded nearly 30 years after,” he says. “Luther himself never mentioned it. There was very little discussion of the nailing of the Theses before the first Reformation anniversary of 1617.”

In 1617, with the Thirty Years’ War on the horizon, a local ruler in the Rhineland area had the idea of organizing a centenary celebration to drum up Protestant solidarity, to increase his chances in the forthcoming fight with the Catholic Habsburgs. “It’s a very good example of history being made because of a current need to create a historical event,” says Pettegree, with an air of admiration.

But even if 2017’s big quincentenary isn’t quite what it seems, the legend that has grown up around the story of Luther nailing his Theses to the church door follows a precedent of historical events that have been remembered differently from the way they actually happened.

Memorials, whether state-led, socially constructed or personal, often do more than simply commemorate an anniversary.

Over the centuries, that 1517 date has been seen in a number of different ways. During the 400th anniversary in 1917, for example, the First World War was raging. At that time, Marshall says, Germans saw Luther’s posting of the Theses “as a quintessentially German and nationalist action — he was ‘unser Luther‘, our Luther.” That idea, in turn, was used to bolster German nationalism and morale during the war.

Over the following decades, the image was co-opted for different political ends. “The Nazis also appropriated the imagery of the posting of the Theses for their own purposes,” Marshall adds. “They saw themselves overthrowing a corrupt old order.”

Ironically, Luther would have hated to be seen as the calculating revolutionary who overthrew the old order, and most historians agree he wasn’t looking to start a “Reformation” in 1517. “Luther always thought of himself as a good Catholic,” Pettegree insists.

Today it’s the Catholic and Lutheran churches, more so than nation states, that are taking the memory of 1517 in their hands. This time last year, on the 499th anniversary, Pope Francis joined leaders of the Lutheran World Federation in Sweden to hold a joint service in a spirit of unity after 500 years of division. “We have the opportunity to mend a critical moment of our history by moving beyond the controversies and disagreements that have often prevented us from understanding one another,” he told the congregation.

Both churches are keen to use the anniversary to signal a definitive break with the past — another example of the way a memorial can be used for any number of ends.

“I suppose the danger with anniversaries is that they can serve to reinforce myths and entrenched narratives of the past, rather than encourage us to look afresh at historical events and processes,” Marshall says. “And there’s been a fair amount, especially in Germany, of uncritical celebration of the ‘achievements’ or ‘legacies’ of the Reformation — tolerance, liberal democracy, freedom of expression, scientific rationalism. All things Luther would have hated!” 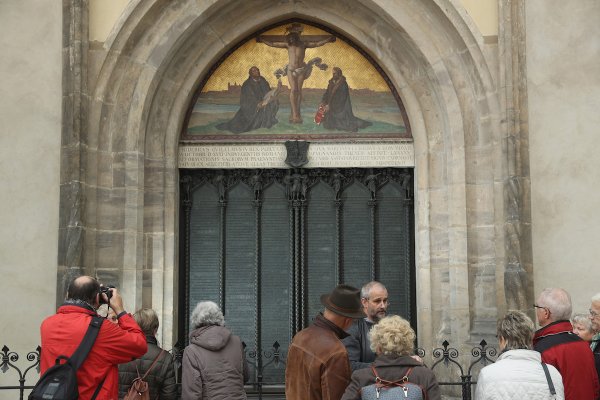 Martin Luther Changed Christianity 500 Years Ago. It Changed Again in the 1960s
Next Up: Editor's Pick