The Telegraph reported this week that an executive at Condé Nast International, which oversees the international editions of the publishing house’s magazines, sent an email to staffers announcing that it was cutting ties with the controversial photographer and that any unpublished Richardson work should be “killed or substituted with other material.” A spokesperson for Condé Nast International confirmed the existence of the email to TIME, but declined to comment further.

Condé Nast’s American arm, which operates separately from its international brand, confirmed to TIME that it has no plans to work with Richardson in the future. “Sexual harassment of any kind is unacceptable and should not be tolerated,” a Condé Nast U.S. spokesperson said. Richardson’s work hasn’t appeared in U.S. Vogue since 2010.

“Terry is disappointed to hear about this email especially because he has previously addressed these old stories,” a spokesperson for Richardson told TIME in a statement. “He is an artist who has been known for his sexually explicit work so many of his professional interactions with subjects were sexual and explicit in nature but all of the subjects of his work participated consensually.”

Richardson, who has photographed a number of celebrities, including former U.S. President Barack Obama, has faced public sexual harassment allegations since at least 2010. A handful of women have alleged that the photographer propositioned them for sex, touched them without their consent or got naked on photoshoots. Richardson denied the allegations in a 2014 blog post titled “Correcting the Rumors,” calling the women’s allegations “an emotionally-charged witch hunt.”

Some have criticized the fashion industry for not shunning Richardson sooner. Condé Nast’s ban follows numerous allegations against Harvey Weinstein. Weinstein, who has been fired from his company, has denied “any allegations of non-consensual sex,” his spokesperson said. In an explosive New York Times report this month that opened the floodgates for more allegations, Weinstein said: “I appreciate the way I’ve behaved with colleagues in the past has caused a lot of pain, and I sincerely apologize for it.”

In the wake of the Weinstein scandal, women have spoken out about their own experiences using the viral hashtag #MeToo and several other prominent men have been accused of sexual misconduct. 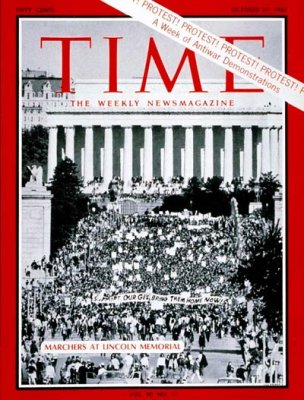 50 Years Ago This Week: Washington's Biggest Peace Protest
Next Up: Editor's Pick